This is the fifth of 52 blog posts for the 2015 edition of the 52 Ancestors challenge. I have been blogging my family history for the #52Ancestors challenge since it began in 2014.#52Ancestors asks bloggers to "have one blog post each week devoted to a specific ancestor. It could be a story, a biography, a photograph, an outline of a research problem — anything that focuses on one ancestor.”

This week's blog post is about my ancestor William Moynahan (1st cousin 3x removed) who lost his arm in farm machinery in 1902 and would later become a well known auctioneer throughout Essex County, Ontario.

It was difficult to find photos of Essex auctions at the turn of the century so I have borrowed photos from other jurisdictions (mostly Alberta) from the same time period to give a sense of the life of an auctioneer in the early 1900s. 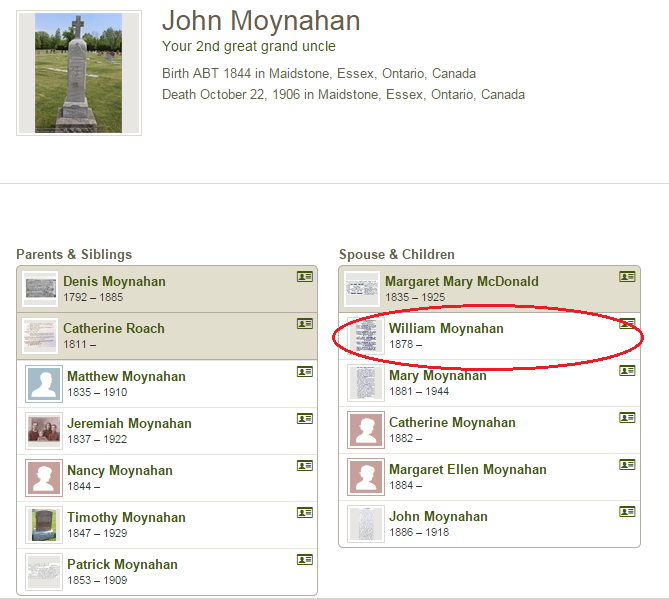 William Moynahan lost his arm in a farm accident (January 1902). 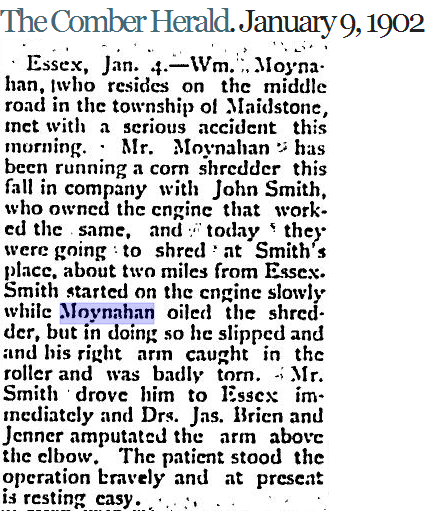 The clipping below shows that in 1918, William auctioned for a time with his brother John Moynahan (1886-1918) under the name in the Essex Free Press of "Moynahan Bros. Auctioneers".

William's brother John was sick with influenza that later developed into pneumonia. He eventually died in November of 1918 on the very farm where he was born on Middle Road in Maidstone. Earlier in 1918 John had been engaged in the cattle business for several years as well as general farming.

I also found William partaking in municipal elections running for position of Maidstone Deputy Reeve several times as well as applying for position of auditor. But it was auctioneering that he was destined to do and by all accounts, he did it incredibly well!

Over the years, William Moynahan partnered with many other auctioneers according to the Essex Free Press:
I located an interesting report in the Essex Free Press of a 1926 Auction at Alex Russette's farm. According to the article below, the Russette auction was well attended by folks from all over the county of Essex and horses sold for as high as $300 each! Cook and Moynahan were the auctioneers and everything was sold out in two and a half hours fetching a high sum of $8800. Russette said "good buyers make good prices" and he was "more than pleased with the results as the proceeds were more than he expected".


Auctioneers were required to be licensed and would be called to sell off properties like the one below that included livestock and farm equipment. Auctioneer licenses in other jurisdictions in Ontario were around $10 in that time period.

I searched desperately for William's date of death and place of final rest. He never married and was last mentioned in his sister's (Mary (Moynahan) Allen) obituary in June 1944 (below). So I knew that William was still alive in the mid 1940s. 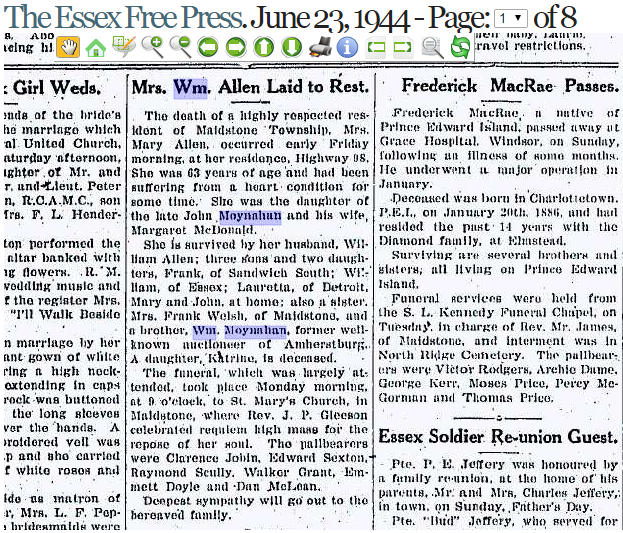 I located a William Moynahan who died  Mar. 6, 1950 and was buried in the Sun Parlor Home Cemetery for Senior Citizens in Leamington but I could not be sure it was "my William". The cemetery listing did not indicate a date of birth.

I searched in vain for a 1950 obituary at the Windsor Star or the Leamington Post  and thought that I would likely have to order his official Ontario death certificate to verify if in fact it was the same William.

I wrote to the contributors of the Cemetery Project online database for the Home cemetery and they said there were no more additional details on file.

And then I found it! In the Essex Free Press on Page 4!


I asked the great folks at the Cemetry Project if it was possible to add this obituary to the listing for William and they did! I am so grateful! Thank you Douglas Gammon!

I am so happy that William Moynahan's story will now be known!