I am gathering stories about the Kerry folk of Maidstone, Essex, Ontario in the hope that by locating their stories I will move closer to locating the stories of my own Kerry ancestors the Moynahans and Brennans.

There were the Brennans, the Downings, the Mahoneys, the Moynahans, the O'Connells, the O'Connors, the O'Falveys, the O'Sullivans and the Shuells to name a few of the Kerry Irish families who ALL chose Maidstone (aka "The Irish Settlement") for their new home in the early 1800s.

I love the story of the Kerry woman (born O'Sullivan "at the "Cross Roads " in County Kerry") who lived with her second husband Dr. John O'Falvey at Lot 5 on the Middle Road in Maidstone next to my 3rd great-grandfather Denis Moynahan who lived on Lot 6.

"Maidstone: The wife of Dr. John P. O'Falvey of Maidstone departed this life on Wednesday morning 3rd inst. after a residence in Maidstone of fifty-nine years.

She was born at Cross Roads, County Kerry, Ireland on the 3rd day of March 1808 and was eighty-nine years and nine months old.

She was the sister of Captain Eugene O'Sullivan who was lost in the ill-fated ship Maria Joseph in 1844 while conveying colonists from St. Malo, France to the Pacific coast whose estate deceased has been claiming and to which she is legal heiress.

She was also first cousin to the Hon. Judge John O'Connor and was a descendant of a very highly respected family in Kerry.

She was universally respected by all her friends and neighbours and many weary travelers hungry and footsore she relieved in those days when Maidstone was nothing but a wild forest when she settled there with her first husband in 1825. Her house was always open to the wayfarer and the traveler. She leaves a large family to mourn her loss."

The Amherstburg Echo obituary (above) does not indicate her name but we know she was born Sullivan because she was "sister of Captain Eugene O'Sullivan".

I did a quick search of ancestry.ca for O'Falvey 1884 and found a photograph of her beautiful headstone at St. Mary's cemetery (Maidstone, Ontario) where I learned that her name was Margret.

The last census that she would have appeared on (1881) confirms that her name was Margaret and that her husband Dr. John O'Falvey who was the coroner and 25 years her junior!. There is also a Lawrence Costigan (born 1846) living with them.

There are so many other details contained in this one obituary that would be wonderful to research in more detail. For now, I picture a smiling Kerry woman, welcoming weary travelers with a warm cup of tea and a soft seat near a warm fire.

It seems almost poetic that Margaret left the Cross Roads in Kerry to live her life at Maidstone Cross in Essex county, Ontario.


From the Cross Road Village of Kerry Ireland
to the
Maidstone Cross, Ontario

I was delighted to locate an historic photo of  Margaret's "Cross Road Village, Kenmare, Kerry" that is part of the Lawrence Collection, which holds 40,000 glass-plate negatives taken between 1870 and 1910.


You can zoom in on the image (see below) by following this link: http://catalogue.nli.ie/Record/vtls000322734

If you have any connection to the Sullivans or O'Falveys of Maidstone, Ontario or any of the Kerry folk of Maidstone, please leave your remarks in the space provided below.

In my next post on "The Kerry Folk of Maidstone" I hope to learn more about Mararet's husband Dr. J.P.W, O'Falvey

His name is mentioned as coroner on some interesting cases in Essex county and, based on the Detroit Free Press article below, he may have a little of the Kerryman sense of humour that would make for some interesting stories.

And a shanty fire that he attended as coroner


This blog post is the first of several that I hope will assist me in locating the townlands and parishes of my ancestors in Ireland.

My 3rd great-grandparents John and Catherine (Bowler) Brennan emigrated from Kerry, Ireland to Essex, Ontario in 1853 with their only child Mary (my 2nd great-grandmother born in 1841) who was only twelve years old at the time.

The living conditions in county Kerry Ireland during the ten-year period between 1841 (when my 2nd great-grandmother Mary Brennan was born) to 1851 were horrific.


The above graphic came to my attention after I read the Brennan Blog: Breaking your brick wall with newspapers by Martine Brennan. Martine added,

My Brennan ancestors were preparing to leave County Kerry, Ireland for Canada in the Americas around the very same time period that this pencil sketch was made. My Brennan ancestor eventually settled on land in Sandwich, Essex county, Ontario right next to the O'Connells who had emigrated as well. When you are researching, ALL facts and coincidences are noteworthy!

I hope to discover more about the story of my 2nd great-grandmother Mary (Brennan) Moynahan (pictured below with her daughter Nellie) who emigrated from Co. Kerry, Ireland at twelve years of age in 1853. 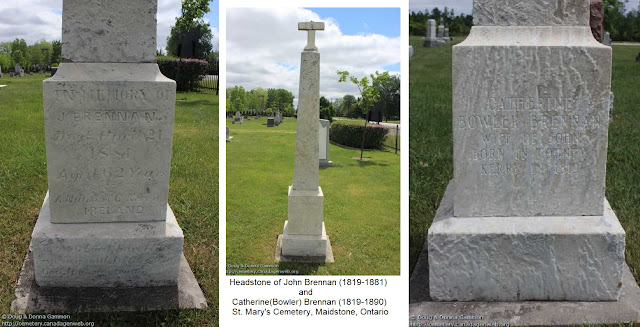 It is clear that "Kerry" was an important distinction that the Brennan family wanted carved into their headstones.

This helps narrow down my searching from 1840 to 1843 in the online Irish registers that were put online in July 2015 by the National Library of Ireland (NLI): https://registers.nli.ie/

Mary's emigration from Ireland to Canada is also mentioned in her June 25 1926  Essex Free Press  Obituary:


"An old resident of Maidstone Cross section passed away on Monday moring at her home 432 Hall Ave. Windsor in the person of Mary Moynahan, relict of the late Jerry Moynahan. Mrs Moynahan, whose maiden name was Mary Brennan, daughter of John Brennan was born in Ireland 85 years ago. When 12 years of age she came with her parents to Canada and they settled in the township of Sandwich South......." 1857 - The Brennans Settle In Essex, Ontario

In 1857, John Brennan got the deed for 298 South Talbot Road and the family is shown on the 1861 census in Sandwich West as mother, father and daughter and all from Ireland.

Every clue that could possibly help in tracing the Brennan/Bowlers back to their townland in Kerry Ireland must be examined.

In the record below, John and Catherine (Bowler) Brennan are the godparents of Mary McAuliffe, daughter of Michael McAuliffe and Anna Maria Houlihan. I am still trying to locate records on the Essex county McAuliffes.

Was Mary Brennan An Only Child?

It is unusual to see Irish Catholic families with only one child. I wonder if the Brennan family met with severe hardship during the famine in Ireland in the 1840s or if they suffered losses on the voyage across the Atlantic.

It seems clear that Mary (Brennan) Moynahan did not receive an education in Ireland. Both her mother Catherine (Bowler) Brennan and Mary were recorded on the 1861 Ontario census as unable to read or write but John Brennan could read and write.

I thought I would look for more clues by looking back on my correspondence from the 1980s when I began to ask questions about my Irish ancestors of cousins like Brother Bernard Broderick (1916-1992), Evelyn Janice (1916-2009) and the Finn and Lennon families.

In the 1980's I wrote to my 1st cousin 2x removed Evelyn (Lennon) Janice (1916-2009). Evelyn had to prove that her grandmother was born in Ireland in order to get citizenship so I wrote hoping to learn more about our shared family history


Evelyn's parents Edward and Kate (Moynahan) Lennon lived at 15 Moy Avenue in Windsor, Ontario (according to the 1921 census) and 432 Hall Avenue where Mary lived with her daughter Nellie Moynahan ran parallel and was the next street over from Moy. (Read more about this Lennon family at 52 Ancestors No.16 - The Lennon Sisters )

Here are some of Evelyn's remembrances from her visits with her grandmother: 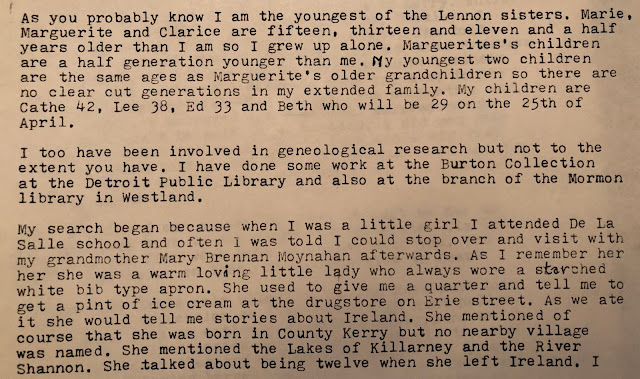 I love the details that Evelyn shared with me in her letter (dated April 18, 1988) about the starched apron, sharing ice cream and tossing a coin in the Atlantic and I am so grateful to have these images of my 2nd great grandmother Mary (Brennan) Moynahan (1841-1926)

And Evelyn also shared what she learned from her trip to Ireland on October 1986:

Looking For More Clues From
My Jobin Cousins of Maidstone

I found the following article that was written about my Great Aunt Nellie Moynahan who was a school teacher in Essex County. 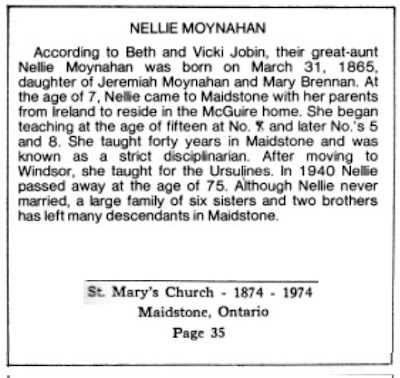 Nellie was the daughter of Jeremiah and Mary (Brennan) Moynahan and she was born in Maidstone Ontario on March 31, 1865.

Her mother Mary Brennan was born in Ireland and I think the following sentence may yield helpful clues: She "came to Maidstone with her parents from Ireland to reside in the McGuire home."

Could the McGuires be a clue to the townland that the Brennans came from in Ireland? Were they related in some way or perhaps friends in county Kerry? 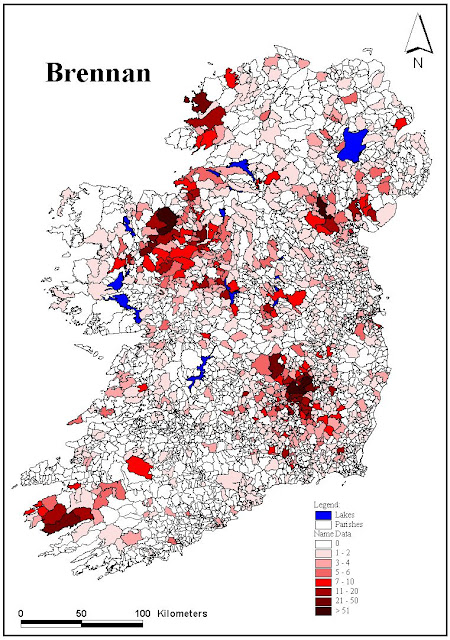 I have located all of the Canadian BMD records (almost) for my Brennan/Bowler ancestors from County Kerry.

The one exception is that I have been unsuccessful in locating a death record/burial record/obituary for Catherine (Bowler) Brennan online. I plan to write to St. Mary's church in Maidstone, Ontario to see if they can locate a record.

The list of outstanding records needed:
We are planning a trip to Ireland in 2019. I am hopeful that I will locate the needed records by then.

County Kerry (Irish: Contae Chiarraí) is a county in Ireland. It is located in the province of Munster. The county town is Tralee, Kerry. The name Kerry is derived from Ciarraighe, or "people of Ciar" the name of the pre-Gaelic tribe who lived in part of the present county. (Source: Family Search: County Kerry)