This is a news story about a Moynahan cousin from Tilbury who appeared in the news in 1964 having been the sole survivor of a car accident that claimed the lives of four other persons.

In the final paragraph of one of the many news stories about the accident, Donald Moynahan said,

I guess I better touch wood." 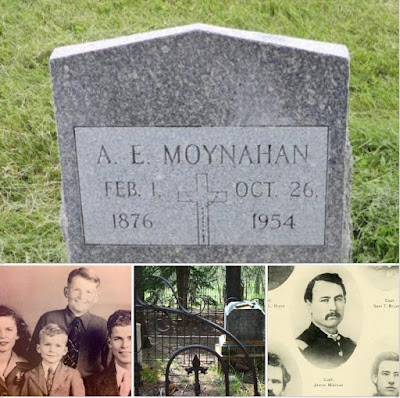 Ambrose Moynahan was a mining engineer and is one of our Michigan/Colorado Moynahan ancestors. While researching Ambrose in 2017, I discovered two surprises:

Things I Learned About My Nova Scotia Roots (in Ohio)

In 2016, I visited my maternal aunt in Ohio. I had not been there in forty years! My mother Dawn (Creighton) Moynahan had passed away thirty-five years ago and then I moved even farther away to Sudbury!

It had been a very long, long time and drove there with my other maternal aunt (my aunt Deb) and when we arrived, my aunt Barb shared her home, her hospitality, some wonderful photos and cherished stories with me. I am so grateful. It was a trip that I will never forget.

Below, I will try to summarize, in twenty-five words or less, a few of the things that I learned.

The Visitors From Australia - NOT Our Moreland Kin

In 2015, while visiting my aunt Barbara in Ohio, I was shown the picture below that was taken in Tuft's Cove, Nova Scotia presumably in the summer of 1941 and is known as "Visitors from Australia" . This blog post describes my attempts to confirm the identity of the three Australian visitors.

UPDATE: In less than twenty-four hours of posting the photo, an Australian descendant of  Susan (Marrinan/Willis) Moreland (her grand-daughter) wrote that:


"Thanks for the photo.   I don't think this is my family in the photo...  In 1941 the war was on and my mother was living with my Nanna Susan Moreland (her mother-in-law).  She ... definitely didn't go overseas then or to my knowledge ever. Ena Mary Moreland (that's what written on her death certificate) did die on 26th August 2010.  She was 17 in 1941.   She was the daughter of Charles Moreland and Susan Moreland.   Ena was deaf and had no children.  She never went overseas, that I know for sure..."

Rather than delete this blog post about our Australian Moreland ancestors, I have decided to leave it here to honour Charles, Susan and Ena Mary Moreland (who died August 26th )and hopefully one day, I will find photographs to add to our tree.

My daily genealogy practice since 2017 has been to create monthly calendars using my Family Tree Maker 2017 program that lists all of the births, marriages and deaths for the 3,072 ancestors in my family tree.

Each day, I look at the ancestors listed on that particular day and I: 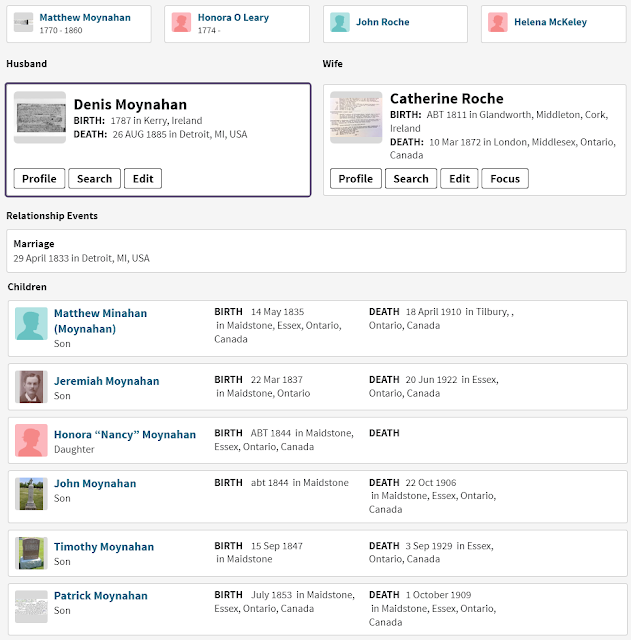 For decades we have been collecting our ancestor's stories by tracking their footsteps since they first arrived in Canada and America in the early 1800s.

In 2019, our brother Pat Moynahan sponsored our very first trip to Ireland so that we could  search for our ancestor's stories there.  We have many stories to share about our Kerry Moynahan ancestors and we are publishing them under the title "The Kerry Chronicles"

Family historians regularly use the popular internet auction website eBay as a source for genealogical records and books and many years ago I set up an eBay alert for "Moynahan -Bridget". (I had to put "-Bridget because I wanted to avoid being notified every time a Bridget Moynahan poster or movie went on sale!)

I was delighted when I was alerted that this group of "Cecelia Moynahan" postcards (below) were for sale! 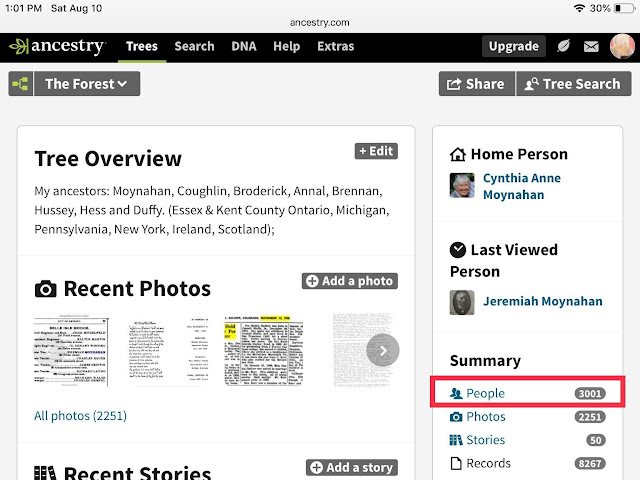 Yesterday, I reached a new milestone in my family history research when my ancestry account recorded 3001 people in my family tree.

I was doing a blog post  on Mary (Moynahan) Parks (1833-1905) and I was distracted when I learned that her son-in-law Peter H. Donnelly died in the Railroad Exchange Hotel (demolished in the 1920s) in Salt Lake City in 1891.

Here’s the thing: on ancestry.ca, Peter's death was recorded as “Murdered, in, hotel, Salt Lake City, Salt Lake, Utah, USA” by someone who has done extensive research and with whom I have written to over the years. I trust her work!

My daily genealogy practice since 2017 has been to create monthly calendars using my Family Tree Maker 2017 program that lists all of the births, marriages and deaths for the 2,946 ancestors in my family tree.

Each day, I look at the ancestors listed on that particular day and I:

I had been wanting to write about the Warnock family for some time and what better occasion than on the anniversary of Hannah (Moynahan) Warnock's death on August 3, 1948.