While exploring "Cyndi's List" new category 'US & Canadian Border' (45 links), I found this Border Crossing Card dated 28 June 1927 for my grandfather Ernest Joseph Moynahan. This shows a photograph of him taken a couple of years before he married my grandmother Rhea Fern Coughlin in 1929.

From this card, I learned that:


Some of the links that "Cyndi's List" listed require a subscription ($) and some are free. Definiely worth visiting if you are researching ancestors who lived near the border like my ancestors from Detroit and Windsor!

Visit Cyndi's list at http://www.cyndislist.com/ports-departure/us-and-canadian-border/?page=1
Visit Michigan's Railroad History - State of Michigan https://www.michigan.gov/documents/mdot/Michigan_Railroad_History_506899_7.pdf
Posted by Cindi at 8:32 AM No comments:

I learned that my 2nd great-grandfather Martin Broderick was the recipient of a Fenian Raid medal for his service in 1866.

In the Detroit Free Press newspaper excerpt below, " For his services in the raid Mr Broderick was given a grant of land and a medal. The latter was, he considered, his most valuable possession, and until three days before his death he was seen on the streets with the trophy pinned to his breast."

The location of Martin Broderick's medal is unknown.

I searched the Library and Archives Canada website for Martin Broderick http://www.bac-lac.gc.ca/eng/discover/military-heritage/military-medals-1812-1969/Pages/search.aspx and found him (File 4-261):

The link 15914 took me to a  digitized image of the original Fenian Raid medals registers (available in PDF format). 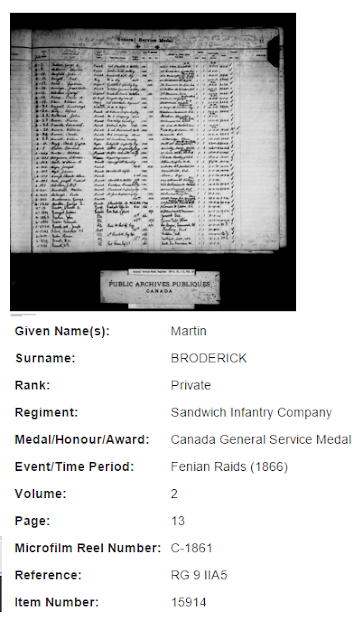 From this register, I learned that, despite announcing the Fenian Raid medals in 1899 (33 years after the Fenian Raid), Martin did not actually receive his medal from the government until 1914, one year before he died.

I had written to the Library and Archives of Canada to see if there was any additional information in their holdings on Fenian Veterans such as Marti Broderick.

I received a very helpful reply :

Thank you for your recent inquiry concerning Martin Broderick.  In reply, I wish to advise you that there are no surviving application forms for the Canada General Service Medal.

There are applications for the Volunteer Bounty Claim (RG9 II A 4).  There is an old index on microfilm to those names.  B names are on reel C-15721.  The index provides a “List” number.  Those lists are not on microfilm.

Some of our microfilm reels with the prefixes C, H and T are being digitized on our partner website Héritage:http://heritage.canadiana.ca/?usrlang=en.  Digitized reels can be viewed free on that website.  Enter the reel number in the search box, e.g. C-5219.  If the reel is digitized, click on the reel title to see the images.  (Note that some reel titles may be incorrect.)  You can browse through the page images; the content (text) is not searchable.  Also note that an image/page number is not the same as the archival document page number.

Image 2895 shows the card for Martin Broderick.  The reference is List 279.  To pre-order that archival record, please cite:


History of the Fenian Raid

There is a great deal of nformation on the Fenian troubles in Sandwich that can be found in the online book "Township of Sandwich (Past and Present)"; Neal (Sandwich, 1909)

"Fenians received their name from John O’Mahony, who labelled them after the Fianna Eirionn, the ancient Irish warriors. Chief among the Fenians' goals was Irish independence, but they were divided on how this could be achieved." (Source: http://www.thecanadianencyclopedia.ca/en/article/fenian-raids/)

History of the Fenian Raid Medal
and Land Grants

"In 1895 the Veterans of ’66 Association had organized a national petition for the recognition of all the volunteers who served during the Fenian Raids. In January 1899, in response to the petition, Britain authorized a Canadian General Service Medal for veterans of the 1866 and 1870 Fenian Raids and the 1870 Red River Rebellion. Anybody who was on active service in the field, had served as a guard at any point when an attack from the enemy was expected, or had been detailed for some specific service or duty was eligible for the medal upon applying for it—it was not issued automatically. There were 15,300 of these medals issued to Canadians with their individual names and units engraved on the rim. (Another 1,368 were claimed by British veterans.) In.....1901 the province of Ontario undertook to grant its Fenian Raid veterans 160 acres of provincial land if they applied for it".(Source: Canada Decoration Day)

In 1901, "An Act to provide for the appropriation of certain lands for the Volunteers who served in South Africa and the Volunteer Militia who served on the frontier in 1866" (1 Edward VII, C. 6) was passed.

Upon furnishing satisfactory evidence to the Commissioner of Crown Lands that he/she was a member of one of these classes, the applicant was entitled to a certificate of location for 160 acres of land.

Lands in the following townships were set aside by proclamation for the grants: Aubin, Beck, Carnegie, Crawford, Dargavel, Gowan, Holmes, Hoyle, Kidd, Kingsmill, Lennox, Lucas, Murphy, Nesbitt, Prosser and Wark in the Temiskaming District; Lyon in the Thunder Bay District; Borden, Chewett, Cochrane, D'Arcy, Gamey, and McGee in the Sudbury Districts; and Burk, Hartman, Pettypiece and Revell in the Kenora District.(Source: Archives of Ontario)

I found this interesting newspaper reference to my 2nd great-grandfather Martin Broderick in the 1919 Border Cities Star.

John and Leo were executors to my 2nd great-grandfather Martin Broderick's will and had applied to the Ontario Supreme Court for the title to a piece of land in Sandwich West under the "Quieting Titles Act".

Actions under the Quieting Title Act are "to finally resolve competing claims over the same parcel of land." and "offers the most definitive resolution of title problems." (Source: Adverse Possession: Pulling Out All the Stops; N.S. Barristers' Society)

The map below shows the location of Martin's 100 acres in Sandwich West township (Essex County, Ontario) in 1877. Note also a J. Broderick and a  P. Broderick in the bottom right of the map photo. This particular triangular area is the present day location of a "ghost road" or a "disputed road" as it has historically been known.

The so-called "Disputed Road runs north south from a point just south of Normandy Street until it reaches the Middle Side Road boundary with Amherstburg. The road is one side of a triangle of land, with the other side being Huron Church Road."

"Today carved up by the Expressway and shopping plazas, the road terminates at Dougall and picks up again behind the roundhouse centre for a short distance. The line in red shows the original path of the road, overlaid on a current aerial view." (Source: http://www.internationalmetropolis.com/2008/03/25/ghost-road/)

I came across an interesting blog post on the International Metropolis website about an old Ghost Road in the vicinity. http://www.internationalmetropolis.com/2008/03/25/ghost-road/

"I was told that two brothers were fighting over the land a long time ago hense the name of the street “disputed”. Is that the real story? who knows? maybe the Broderick family would know since they were the owners at the time. As far as I know they are still around."

Could this be related? I am not at all certain. In fact I doubt that this story has anything to do with Martin Broderick (but possibly J. and/or P. Broderick?). I do find it interesting that property in this small section of Sandwich West is the source of so many historical title challenges.

And when we see abandoned places such as this old ghost road, well, you just never know what story it secrets it holds. 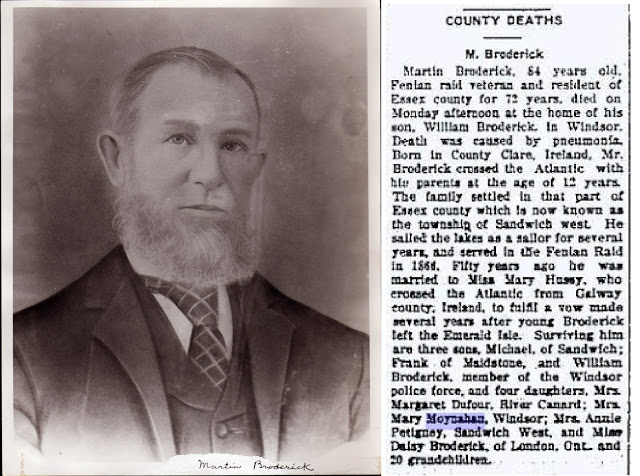 Trivia: The 4th Line in Sandwich West was known as the Broderick Road

52 Ancestors No. 48: The Moynahan-Bondy Family of Detroit 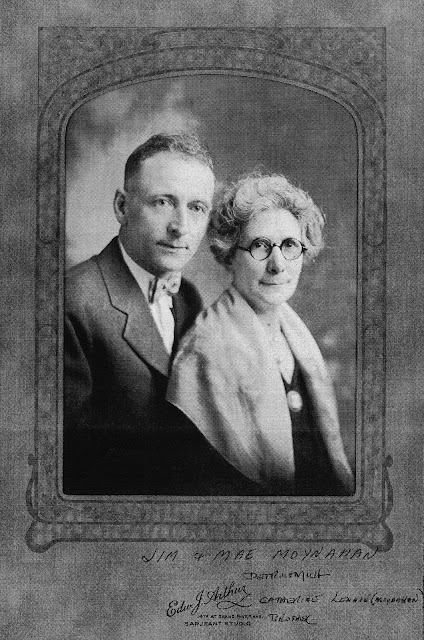 James Joseph Moynahan was born on the 6th of February 1879 in Maidstone, Essex, Ontario, Canada, the son of Jeremiah and Mary (Brennan) Moynahan. He was the seventh of nine children and the second of the two boys living at 298 North Talbot Rd., Maidstone, Ontario

In 1909, a great deal is learned from the U.S. Border Crossing manifest.

In the 1910 census, James is listed as a "painter" in an auto factory. 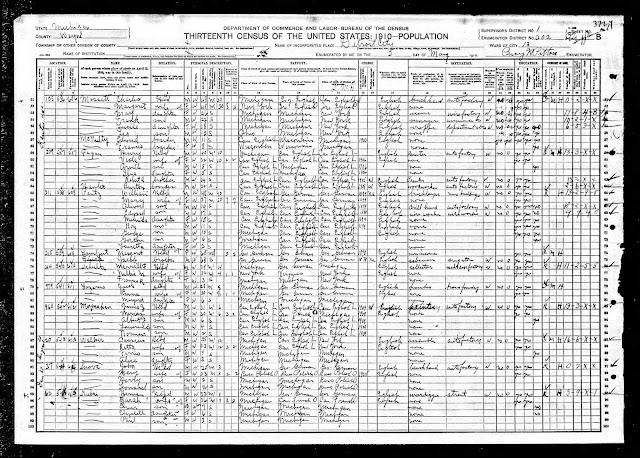 Below is a picture of Jame's and May's first born son Albert Joseph Moynahan. He was born Feb 17, 1904 (Essex, Ontario) and died 2 Apr 1980 (Detroit Michigan). He married Elizabeth Noble.

Both May and James Moynahan are buried at Holy Sepulchre cemetery in Detroit Michigan but I was unable to find a headstone for them at FindAGrave.com. There were  17,621 interments and only 51% of them are currently photographed.