This is the first of 52 blog posts for the  52 Ancestors challenge ~ 2015 edition. The original idea was to  "Have one blog post each week devoted to a specific ancestor. It could be a story, a biography, a photograph, an outline of a research problem — anything that focuses on one ancestor.”

This week's blog post is about my husband's Norwegian (paternal) great grandmother Hannah (Hegna) Foreman. It was a real challenge to track her records in two states (Wisconsin and Washington), two provinces (Alberta and Ontario) and multiple cities. And I still have not tracked down any photographs but I have only just begun.

This is what I have so far:

Hannah had three sisters (Mable, Rena and Ella) and one brother (Carl). 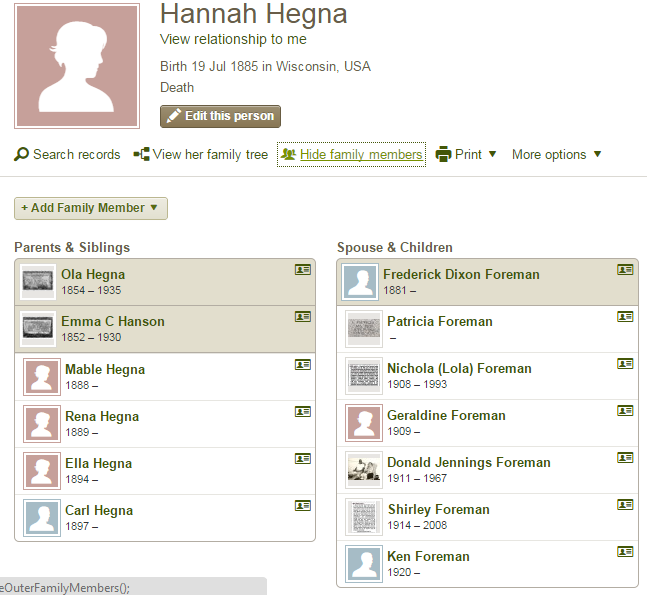 
In this census, we learn that Hannah's father Ola is a house carpenter. We can also determine from this census that the family moved from Wisconsin to Washington some time between the births of  Rena (1888 Wisconsin) and Oscar (1891 Washington).

Hannah married Frederick Dixon Foreman on the 10th of April 1907 in Washington, U.S.A. when she was 21 years old. She was a dressmaker at the time. Frederick's occupation is listed as carpenter.

Between 1907 and 1911, Frederick Dixon and Hannah (Hegna) Foreman made their way to Calgary Alberta. Daughters Lola (Nichola) and Geraldine and son Donald Jennings were born in Alberta. Frederick's occupation is listed as carpenter.

Hannah's language is listed as Norwegian and she is shown to have naturalized in 1907.

(It is interesting to note that Frederick's income is recorded as $2000 which is notably high in comparison to other carpenters of the day?) 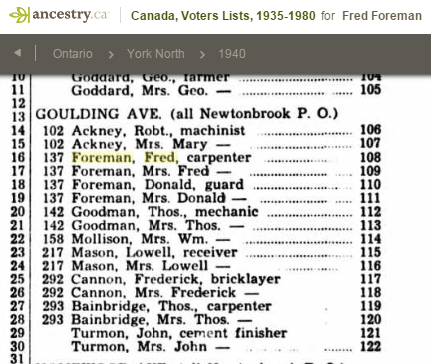 In 1945, Fred and Hannah were living with Patricia on Eglinton Avenue.
Hannah is a dressamaker and Frederick is a carpenter.

In 1949 Frederick and Hannah are living with their daughter Patricia (Foreman) sutton and her husband. Fred is still working as a carpenter. 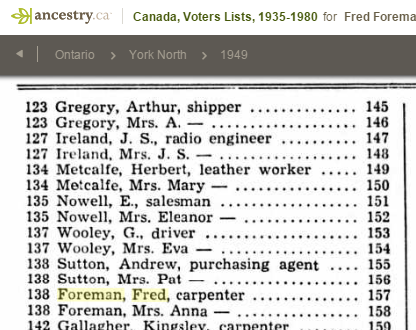 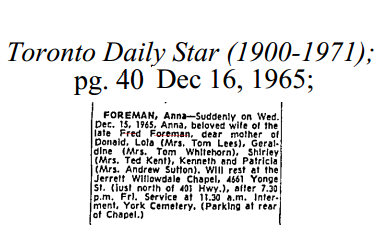