52 Ancestors No.17: The Broderick "Crayon Portraits"

An oral history was recorded in Scarborough, Ontario in 1988 and Bernard's photographs were passed on to me by the Christian brothers at Lasalle manor: Brother Francis and Brother Walter Farrell, FSC Archivist.

The only images that I have ever seen of  Martin and Mary (Hussey) Broderick were found in the package that I received from Brother Farrell. These images were more like sketches than photographs.

Later I would learn that these images were referred to as "crayon print" photographs or "crayon portraits". Crayon portraits were popular from the 1860s to 1900.

I wondered about how these "crayon portrait" images were made? In researching this subject I found RootsWeb Joe Scarborough's summary in 2009 to be one of the best that I read: It follows:

"These apparently photographic quality charcoal portraits were made of your ancestors during the mid to late 19th century. They are what appears to be a charcoal portrait of such quality that you may have commented on the abilities of the artist. Tales abound of their origin. Earlier versions are of lesser quality than the example, later versions can have an eerie lifelike quality."


But How Were They Produced?

"Typically, unless your ancestor lived in, what was to them, a metropolitan area, these were mail order items. An ancestor would send in a daguerreotype, possibly a tintype, and the firm would make a negative from the original print. In the later years nearing the end of the 19th century, and the early years of the 20th century, photographic technique improved and so did the crayon portrait.

Occasionally, traveling Crayon Portrait artists would travel around, setting up a temporary shop in a community store, the owner using the presence of the artist as a promotional gimmick. Regardless of how the service was promoted, the process was the same.

In the early days of photography, think after 1843, prints were the size of the original negative. Imagine the man with his head under a black cloth, behind a large box like camera, with a flash bar of what is perceived as being gunpowder, in the Hollywood version of Wyatt Earp.

The photographs produced were of a handy size that could be carried in a purse or vest pocket. But the public wanted larger items that could be displayed in the home without the expense of hiring a portrait artist. " 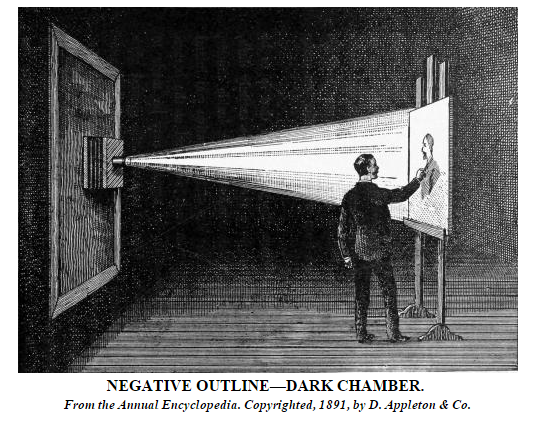 "By utilizing the solar enlarger, somewhat akin to a camera obsura dating back to the days of Leonardo DaVinci, the artist would use the sun to project an image onto the "canvas" where he would sketch the image thus produced. We can tell these earlier works by the lack of detail.

Later, papers were coated with salt and then silver or potassium chlorides wherein they became responsive to light. Because of the nature of the chemical reaction, this would produce a faint image on the paper. The artist would then fill in the details with conte crayon, hence the name crayon portrait, and send the finished product back to the client.

As the process progressed, artist would enlarge the smaller image using longer exposure times and thus impart more detail onto the paper. Still, he "enhanced" the image using the conte crayon. A simple description of a conte crayon is a mixture of wax and charcoal, and they are still available today.

Because of the chemical properties of silver chloride and salts on paper, it wasn't necessary to have a completely dark room to produce the product. In fact, if you were so inclined, you could replicate the process using a yellow bug light, or simply a dimly lit room, and a projector of the appropriate configuration.

Thus, in a time when original photographs were small in size, your ancestors could have a nearly life size portrait produced, at a reasonable cost, and of, for the time, astounding quality. So... those portraits of ancestors that appear to be charcoal drawings of incredible detail are indeed a hybrid of techniques.

The caution is - when having the portrait dated, you are having the original dated, not the Crayon Portrait. The Crayon Portrait could have been produced from a photograph taken years before. Also, it is not advisable that these Crayon Portraits be exposed to strong light. Deterioration of detail, and continued chemical reactions can eventually destroy these precious items of our heritage."