This is the sixteenth of 52 blog posts for the 2015 edition of the 52 Ancestors challenge. I have been blogging my family history for the #52Ancestors challenge since it began in 2014.#52Ancestors asks bloggers to "have one blog post each week devoted to a specific ancestor. It could be a story, a biography, a photograph, an outline of a research problem — anything that focuses on one ancestor.”

This week's blog post is about the Lennon sisters to whom I owe a great deal. In the 1980's they shared a large amount of Moynahan-Lennon-Finn family history with me for which I am truly grateful. 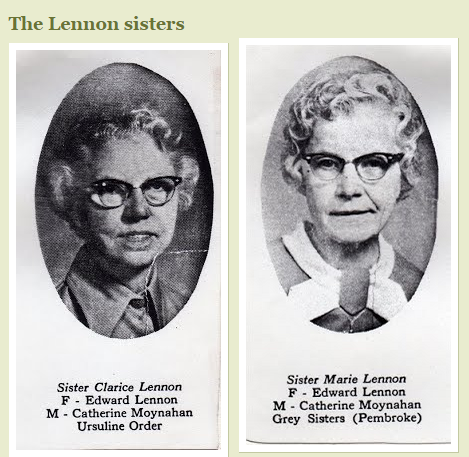 The Lennon sisters were grandaughters of Jeremiah and Mary (Brennan) Moynahan and cousins to my grandfather Ernest Moynahan Sr. 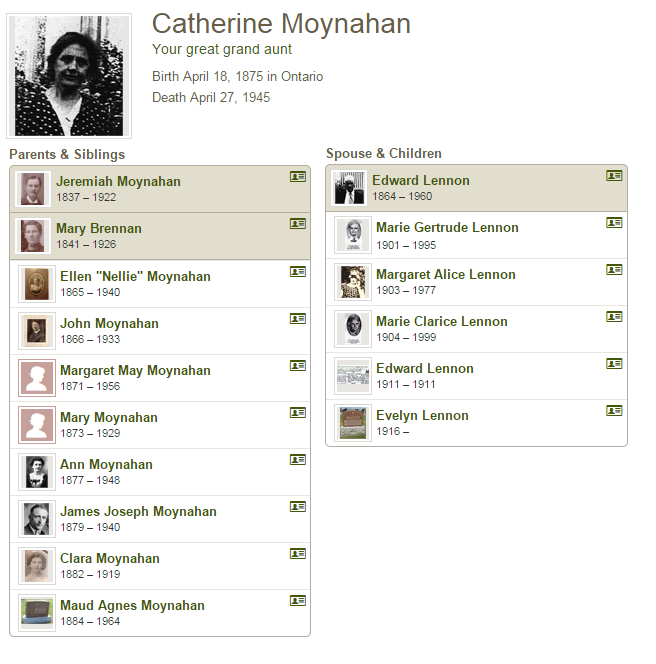 Catherine ("Kate") Moynahan married Edward Lennon on the 23rd of January 1900. From this union, four girls were born in Maidstone, Ontario and a boy, Edward (born in 1911) who died in infancy eleven hours after being born.


In a 1999 reflection by Sr. Patty Boedenstel she said, "Clarice spoke of being from a loving family, and she loved in return. The Lennon family lived on Moy Ave., two houses from Riverside Dr." Prior to moving to Moy Ave the Lennons lived in Maidstone, Ontario.

The Maidstone Lennons were well known in the county. When Edward Lennon passed away in 1960, he was the last of his large family. Edward Lennon was born in Maidstone in 1864 and farmed on the Ed Sexton farm until he took his retirement in 1920.

Catherine (Kate Moynahan) Lennon passed away in 1945 at the age of 70 years. 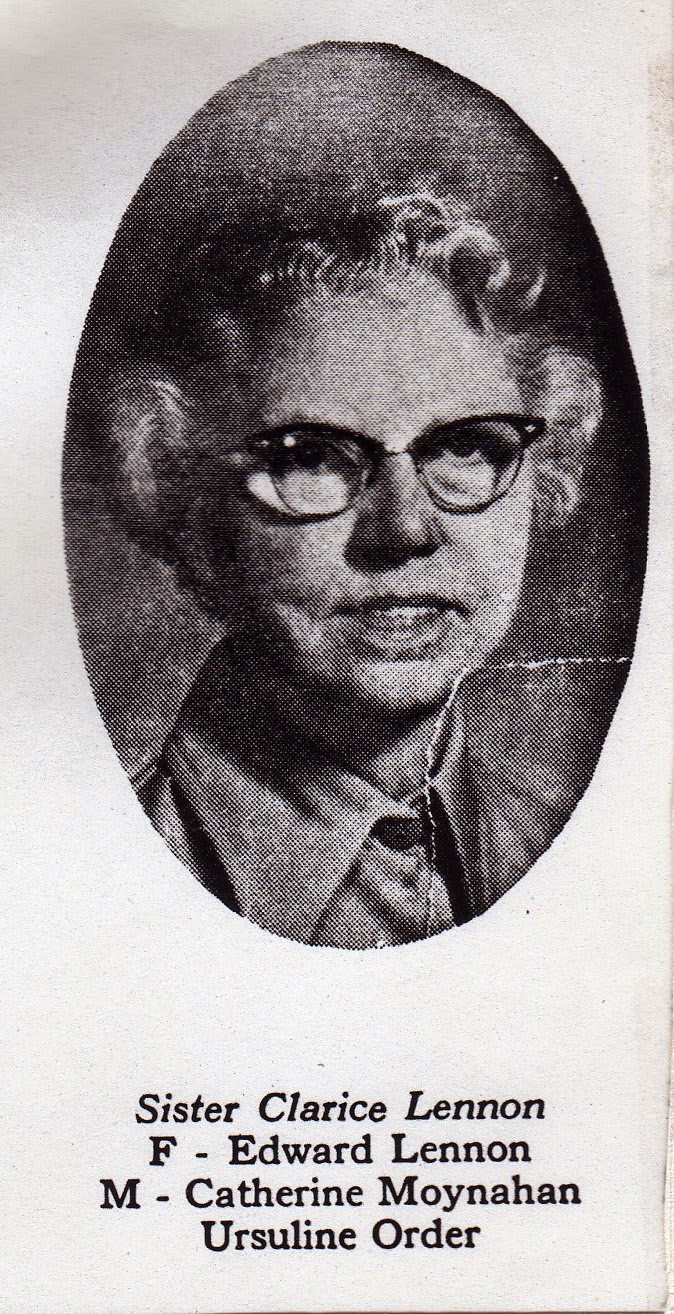 "Clara Mary Lennon was born November 12, 1904 the third in a family of five. She was educated at Maidstone Seperate school, Essex High School and, after the family moved to Windsor in 1920, at St Mary's academy in that city. The following year she was employed as a secretary in an office in Detroit where she worked for five years. During this period she also studied piano and voice at the Ursuline School of Music in Windsor."

In 1921, the family is found on the census living at 15 Moy Avenue, Windsor Ontario. Three of the four eldest daughters were employed as stenographers.

"On June 28, 1925, Clarice entered the Chatham noviate and at her Reception the following December 28 was given the name of Sister Mary Sylvia. She took her vows two years later and made her final profession on December 27, 1930."

After attending Stratford Teacher's College in 1930-31 she began her teaching career in Chatham, Dublin, and Mt. Carmel. In 1959-60 she studied at Brescia College in London where she was the Assistant Superior; she received her Bachelor of Arts from the University of Western Ontario in 1962. She returned to Wallaceburg in 1960 and remained there until 1965 when she was sent to Tecumseh where she taught in St. Anne's High School....She retired from teaching in 1981 and moved to Glengarda in Windsor where she was a valued member of that community for the next ten years. During this time, in addition to her duties as librarian and analyst, she spent many hours visiting residents of Central Park Lodge, bringing encouragement, understanding and love to the seniors who resided there. Her health began to fail and in December 1991 she was admitted to the infirmary community at The Pines where she remained until her death." 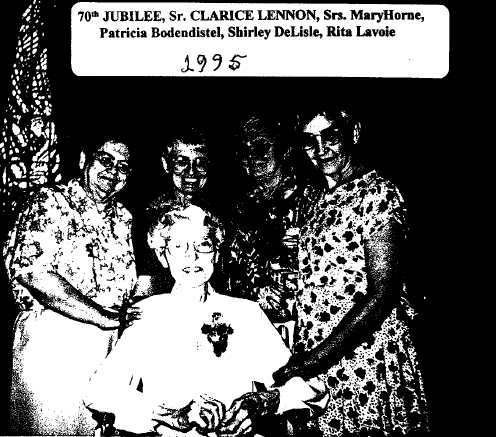 "Clarice didn't ask for much, and would say, "I am an old lady; I don't need all that". She was grateful for the care she received, for the love of family, friends and community. In return we were hugged, loved and thanked."

Sr. Patty Bodendistel said that Clarice was " a woman of integrity, loyalty and truth. Here was a woman of deep faith"........"I often heard Clarice use, "God knows, I've tried." Yes Clarice you tried and remained faithful, and followed your call." 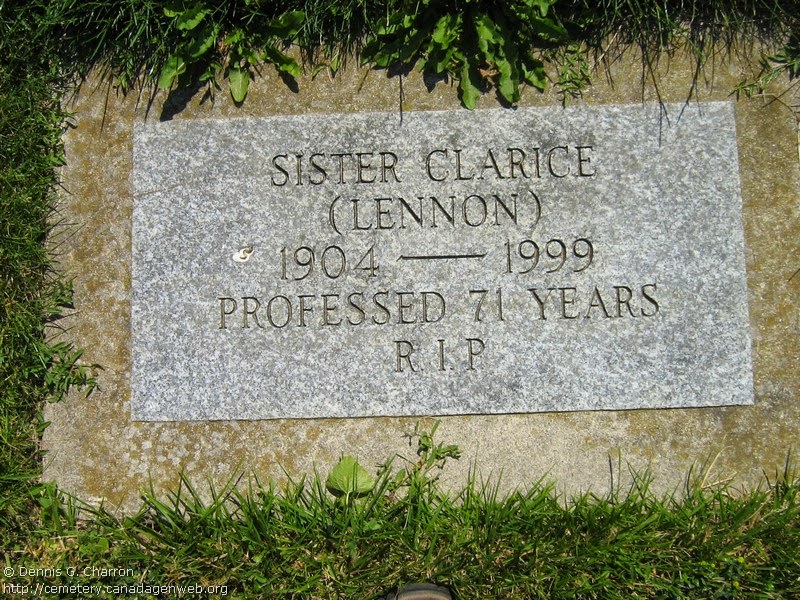 
In Sister Bernice McCoy's eulogy she said, ".....from what I have heard about her family life, as well as what I have observed in her relationship with her sisters and her nieces and nephews, I believe that Marie's appreciation of that great gift of love must have been nurtured in her by her parents, Catherine Moynahan and Edward Lennon, from the beginning of her life which took place in Maidstone, Ontario on April 21, 1901."

"And I know this gift of love is one that she shared deeply with her sister, Evelyn....and whose daughter Cathie....Michael, and their children Caitlin and Sean......"

"It really is somewhat of a mystery that she ever found us here in Pembroke, so far removed from her home in Windsor and her workplace in Detroit." 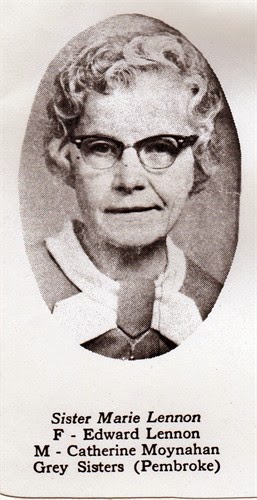 Marie "lived much of her life as an educator. She was twenty-four years at Immaculate Conception School in Windsor, then at Holy Family School in Timmims, at Holy Rosary School in Ottawa, and at Assumption School in Vanier, and for half of this time her standards were high as a teacher and as a principal."


"This commitment in love that Marie lived in the field of education for thirty-three years was directed somewhat differently but nonetheless wholeheartedly, when she was asked to assume the responsibility of General Secretary for the Grey Sister's community in 1970." 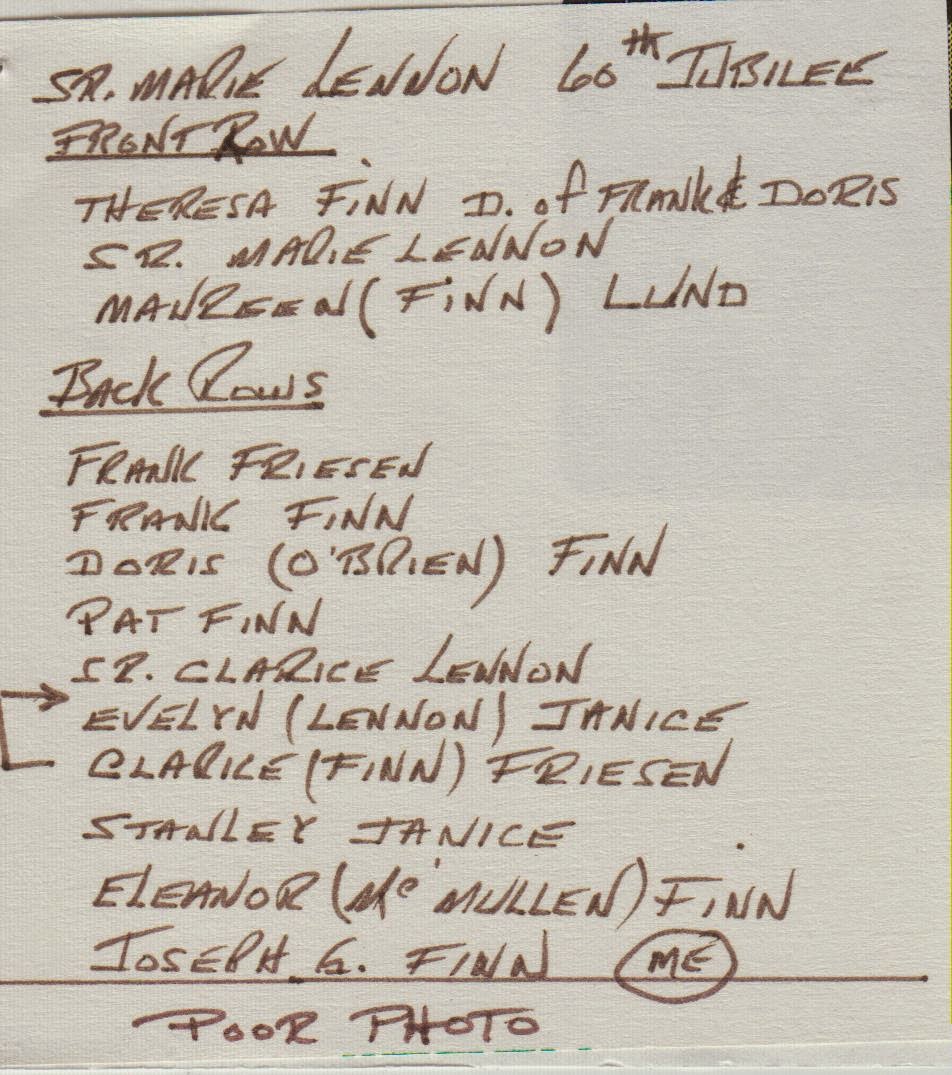 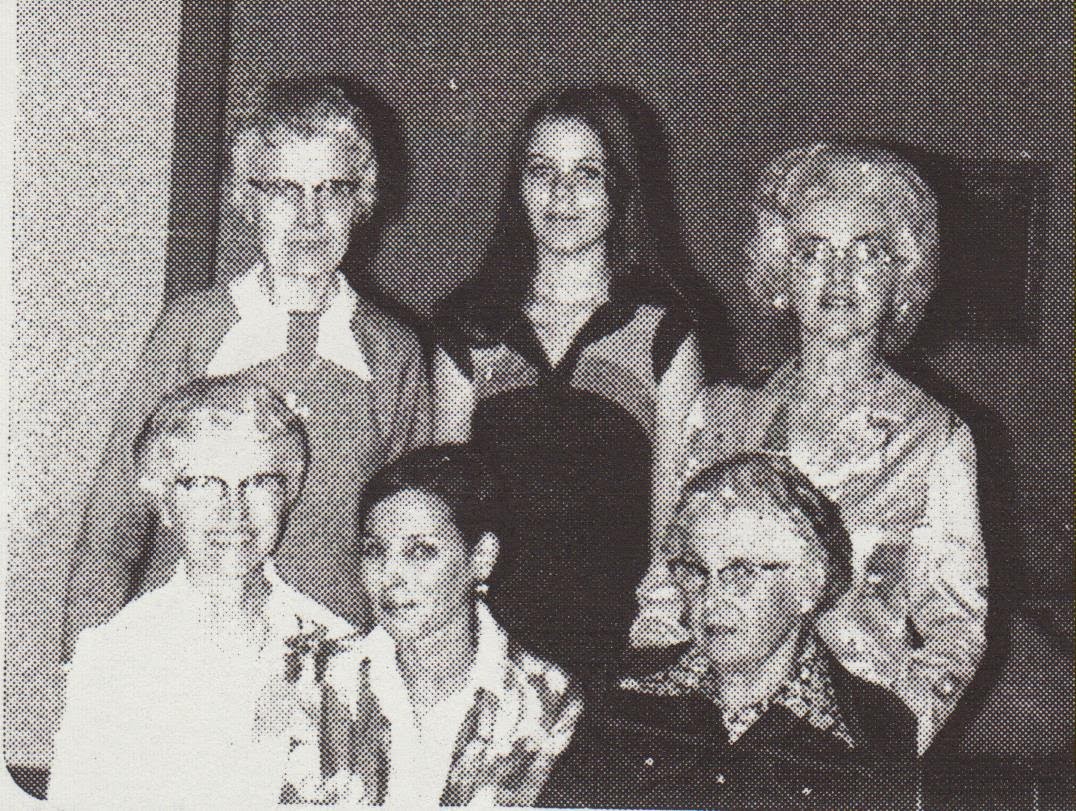 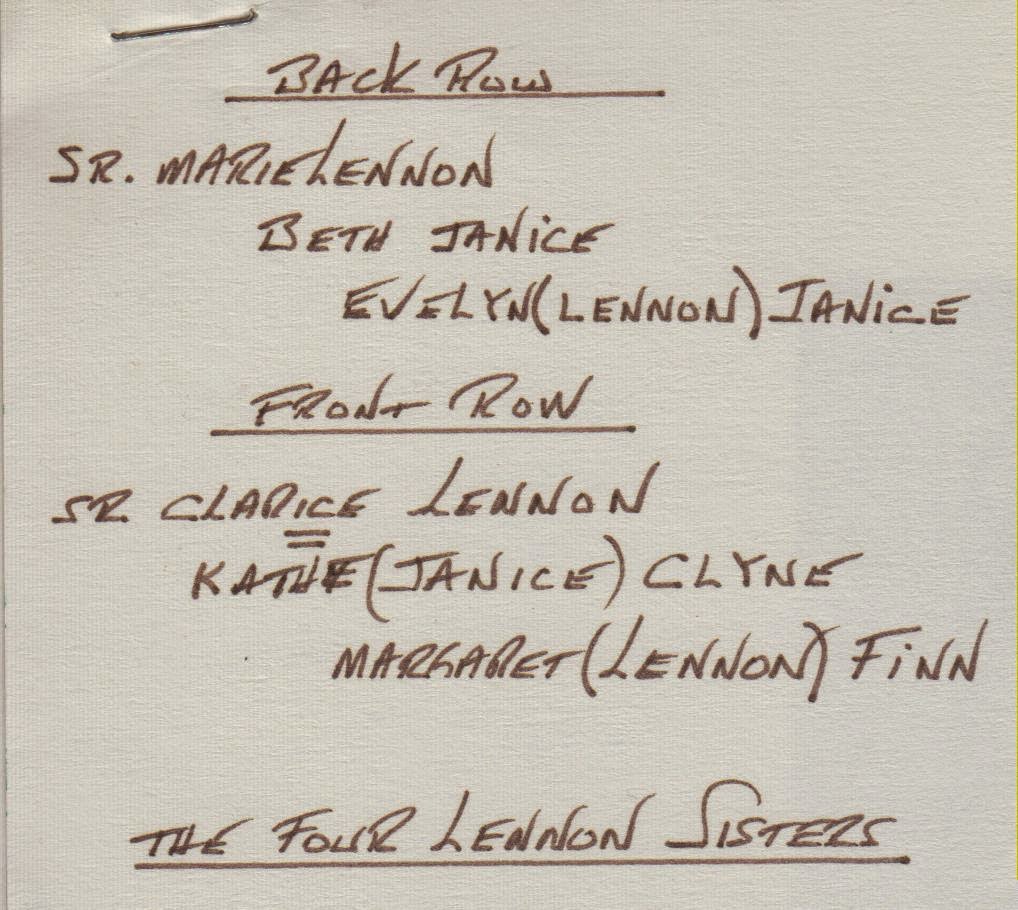 For this week's post, I am indebted to Sister Clarice and Joe Finn for sharing their Lennon family history and family photos with me when I started my research back in the 1980s. I am also indebted to Caitlin Clyne who has recently connected with me and graciously shared the following photos in addition to others on this page: