This post is Part I of an in-depth study of two ancestors sent to asylums in southwestern Ontario in the late 1800s.

The figures show that in Ontario there was one Insane person under asylum treatment for every 1044 of the population, taking the census returns of 1871 as a basis. According to returns elsewhere at the same time England had one under treatment to every 615 of her population ; Scotland, one to every 606 ; and Ireland, one to every 729.

Catherine Moynahan: A Review of the Facts

Fact 2: Asylum Record: We also know when she was admitted into the asylum with thanks to http://www.ontariogenealogy.com/ . I learned of Catherine Moynahan while reading ontariogenealogy.com pages on the Malden asylum database. I ordered the source document (for a fee) and learned the following:

Fact 3: Death Certificate: Catherine Moynahan died March 10, 1872 at the London Lunatic Asylum. She was 46 years old (born 1826? thus a thirteen year difference fro the 1871 census record). More on the stated cause of death (marasmus) later. I will come to learn that her Asylum Reg. No is 384. (See AO information below) 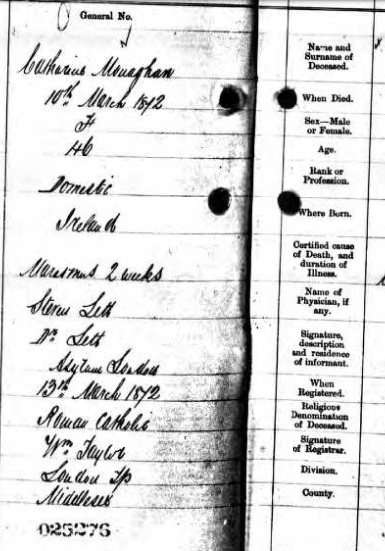 Fact 4: Cause of Death: I could not decipher the cause of death in the death certificate and was delighted that it was stated again in the document below (thanks to Inspector  J.W. Langmuir ). She died from "Marasmus",  a severe form of malnutrition. Marasmus comes from the Greek word marasmos ("decay"). 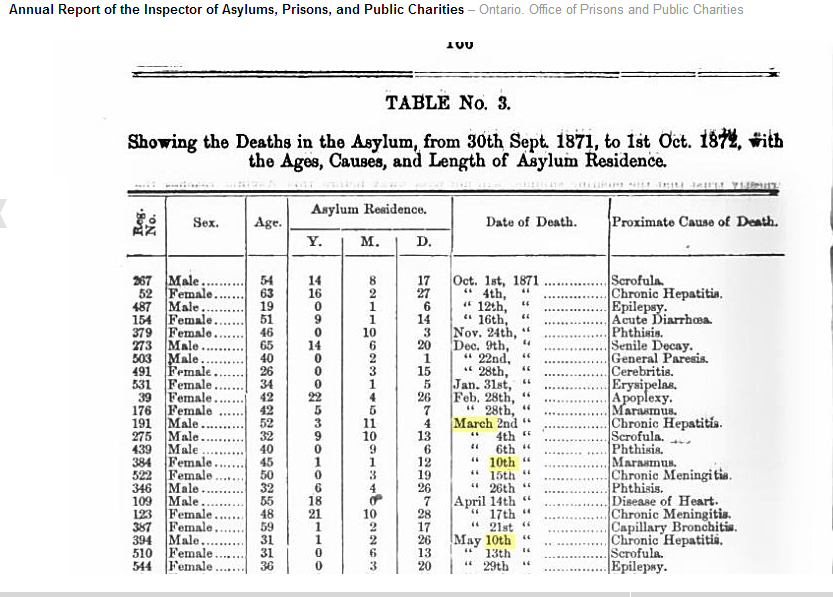 The Annual Report of the Inspector of Asylums, Prisons, and Public Charities, Volume 5, Part 1872 (Google eBook)  was incredibly valuable to my research. J.W. Langmuir was meticulous in his reporting. His report is dated for the year ending 30th of September 1872 (Catherine had died March 1872). Some interesting facts from the report: 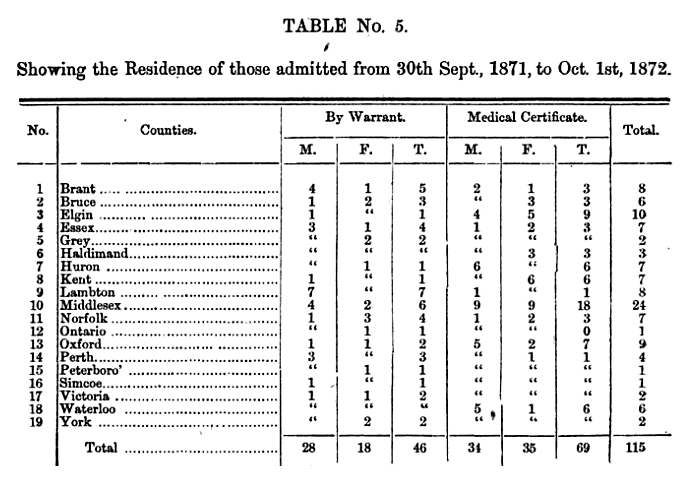 "Early patient records were transcribed by hand into large bound volumes called casebooks. Each patient was assigned a new page in the casebook, in order of admittance. Notes about the patient’s subsequent history were added to the page, which was cross-referenced to a second later page if additional space was needed. "

Note: The Malden Lunatic Asylum closed in 1870, and everything was transferred to the London Psychiatric Hospital.
Records relating to the Essex Gaol (jail) records: