Every now and then, I subscribe to the Detroit Free Press for just one month for the low cost of $7.95. This month I did so because I found a Mary Moynahan (of Sandwich, Ontario) who married Dr. William Weyburn in Detroit in 1849.

Now there are a number of Moynahan women who I have been searching for over the past thirty years and I was hoping that this Mary was Matthew Moynahan's daughter named in his will ( and to whom he bequeathed "one bed and bed clothes"). (See: 52 Ancestors No.18: Matthew Moynahan's Last Will (1770-1860))

Hoping to find more about Mrs Mary (Moynahan) Weyburn,  I perused the Detroit Free Press and I located Mary (and the good Doctor) and I will write a dedicated post on that subject at a later date.

This post however is about the interesting other random bits of news that one comes across while researching newspapers and an idea that I had to create a cartoon based on the following news item about Maggie Moynahan and crows.

I thought it would be fun to create a series of cartoons based on interesting newspaper tidbits such as this and call the series "Ancestor Problems".

Here is the first draft that I did this morning of Maggie Moynahan's missing rosary and Windsor's kleptomaniac crow. 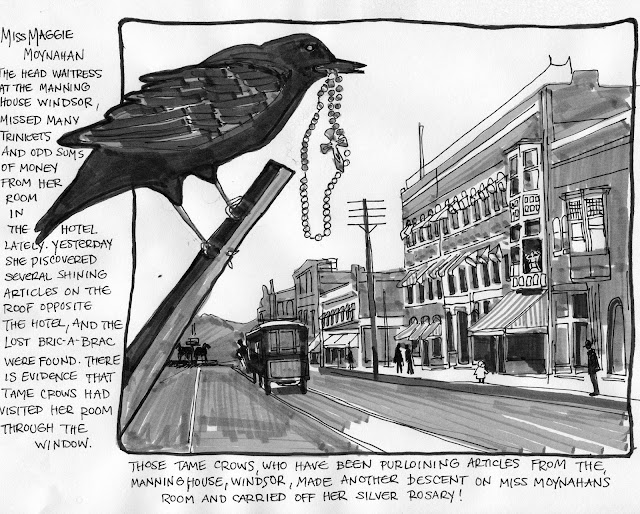