52 Ancestors No. 26: Is Johanna a Missing Moynahan Daughter? 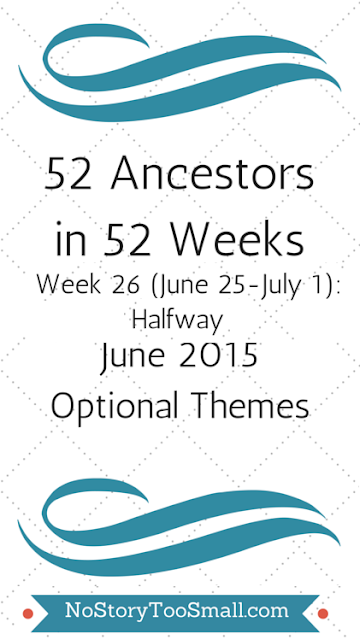 Amy Crow poses the question, "What ancestor do you have that you feel like you’ve only researched halfway?" and I would have to say Matthew Moynahan (1770-1860). I feel like there is still so much more to know about him.

Matthew and Honora Moynahan had nine children and I only know the names of  five:
I know of Jeremiah only because of a legal action that his father Matthew took against him for an unknown event that resulted in property damages. I have still not located Jeremiah in Detroit.

And Mary is known only because Matthew bequeathed all of his "real and personal property" to his son Timothy  "except one bed and bed clothes which I give and bequeath to my daughter Mary Moynahan." I know her name but I have found no records of her whatsoever.

There are two sons and two daughters of Matthew and Honora Moynahan who remain nameless this far.

This post is about a death certificate that may have provided clues to one of the nameless daughters: Johanna.

I was excited and curious about a death register that I located at Family Search for a Joanna (Moynahan) Sullivan (1806 - 1891) daughter of Matthew and Honora Moynahan.

Could Joanna Sullivan be one of the "unknown" daughters of  Matthew and Honora Moynahan of Maidstone, Ontario? 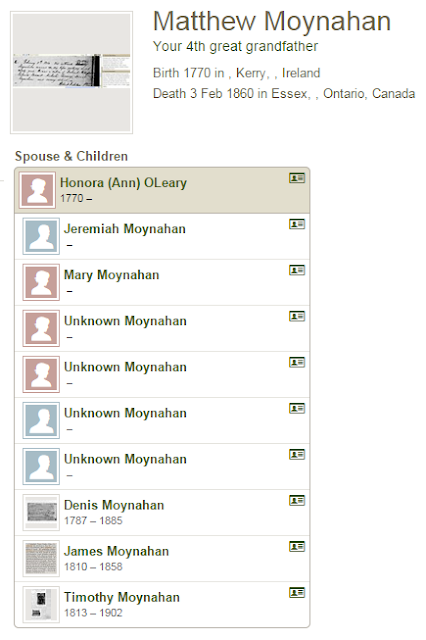 I decided to try and locate more information about Joanna (Moynahan) Sullivan starting with Michigan Census records for Washtenaw County Michigan where she died.

According to the census, Patrick had one eye and Johanna was both blind and deaf at the time.

We also learn that Patrick was a farmer and Hanna (single) was "at home" likely as the sole caregiver for her parents.

Only Hanna and Patrick can read and write (despite not having attended school?) and Patrick and Johanna have resided in the state of Michigan for 54 years (and Hanna for 52 years).

Then I located a history book that had more details on the Sullivan family:


Eugene died in the 31st of October 1881 of typhoid fever thus explaining why on the 1884 record Eugene does not appear and daughter Hanna C. Sullivan is with Patrick and Joanna instead. 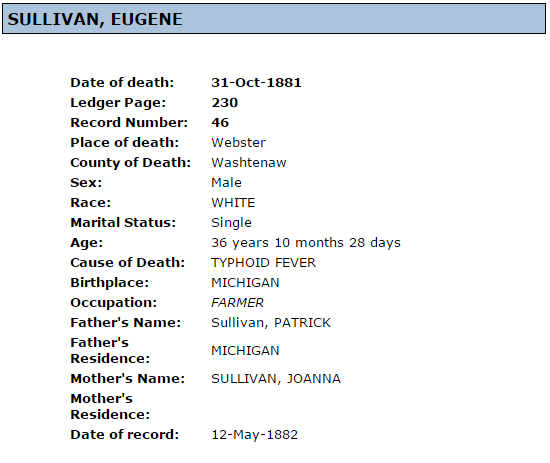 So far, I have learned a great deal about this Sullivan family of Washtenaw County, Michigan but I have no information that Joanna is the daughter of MY Matthew and Honora Moynahan!

Perhaps the way to resolve this would be to locate the 1830 marriage record in New York? I have placed a request to the angels at RAOGK: Random Acts of Genealogical Kindness.