52 Ancestors No. 7: My Oral History Interview with Bernard Broderick


This is the seventh of 52 blog posts for the 2015 edition of the 52 Ancestors challenge. I have been blogging my family history for the #52Ancestors challenge since it began in 2014.#52Ancestors asks bloggers to "have one blog post each week devoted to a specific ancestor. It could be a story, a biography, a photograph, an outline of a research problem — anything that focuses on one ancestor.”

This week's blog post is about my ancestor Bernard Broderick (1916-1992) with whom I had the opportunity to record a family history oral interview in November 1987. 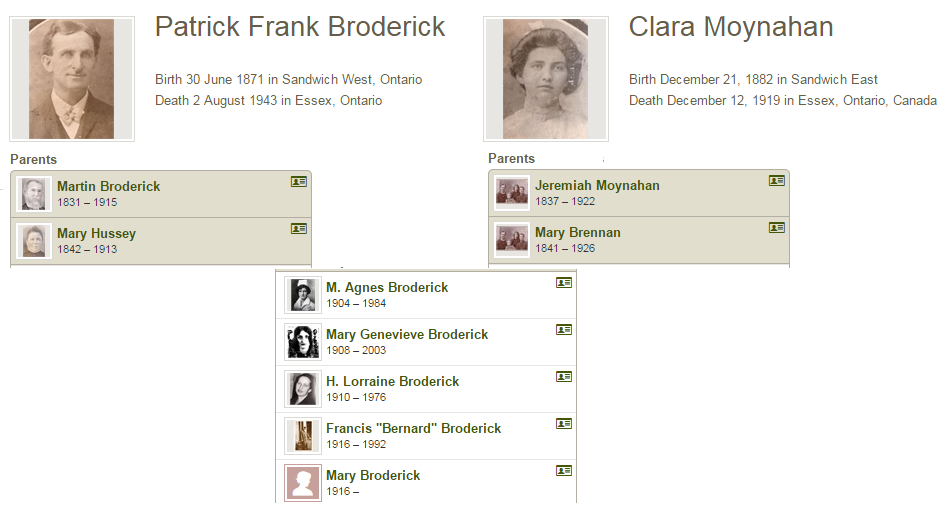 The story that can be gleamed from birth, death, marriage (BDM) and obituary records shows that Bernard's mother Clara (Moynahan) died in 1919 at the young age of 37 years  (after a lingering illness) leaving her husband and five children aged 18 months to 15 years.

Patrick died in 1943. He lived for 20 years in the Border Cities at 431 Wellington, Windsor, Ontario after retiring form life as a farmer in Maidstone, Ontario.

All but one of Patrick and Clara's children eventually moved away from Windsor :

In November 1987 I had the privelege of sitting with my father and Bernard Broderick to reminisce about our family history in Windsor, Ontario. Bernard's family is doubly related to mine in that we both descend from the same two Broderick and Moynahan lineages

Through our discussions in 1987, many more details emerged about this family that could never be known without the benefit of an oral history interview. Bernard told us:

"I am not that useful because I left Windsor and the family and went out at about thirteen years of age. I went and studied with the Brothers. Since that time I've taught in Quebec and ...Ontario...and they never let me get to Windsor for some reason."

"She (Clara) had eight children, but in those days, there was not the medical facilities they have today. If you had ten children you were lucky if you had five that continued you know. So I think that they had five that lived. A number of them died, and it was an interesting thing - there was the oldest of the Moynahan girls (your grandfather was the second oldest) but the oldest was Nellie, her name was Ellen but they called her Nellie. She was like the godfather...she acted as midwife, and she took over. She was....domineering..""

About Clara's death (when Bernard was three years old):
"...when my mother died my father moved to Windsor And, uh, believe it or not we had money because I do know that he owned a farm - I remember hearing as a small boy that he had paid $7200 for that house - well that was a lot of money in those days. Then he bought another house. But my mother wasn't there and that was bad. We suffered because of that. Oh we suffered terribly. I was sent to a relative at River Canard......." (the Dufours)

About Bernard's father Patrick: When asked "was your father a big man?" "He was about 240 lbs."

Bernard passed away in 1992 in Toronto. His words recorded from our brief 1987 meeting have proved invaluable to my family history research.

I encourage all family historians to seize the opportunity to sit with a recorder and/or pen and paper and capture the details from the past that exist in the memories of our living family members. Below are some great web links to help.