This is the ninth of 52 blog posts for the 2015 edition of the 52 Ancestors challenge. I have been blogging my family history for the #52Ancestors challenge since it began in 2014.#52Ancestors asks bloggers to "have one blog post each week devoted to a specific ancestor. It could be a story, a biography, a photograph, an outline of a research problem — anything that focuses on one ancestor.”

John was the last of my great grandmother Coughlin's Annal clan (parents & brothers & sisters). He was a bachelor until he was 51 years old. He was a sailor on the great lakes, a carpenter, and a farmer. He cared for his parents (sailor James Annal and Mary Hess) in his home in their final years and his nephew Lawrence Coughlin was a flower bearer at his funeral in 1960

John was born on the 9th of January 1875 in Pilkington Twsp, Wellington County, Ontario, Canada the second son of James Henry Annal and Mary Hess.

We know from the 1926 marriage record that John was a carpenter living in Windsor at the time of his marriage. The "quiet wedding was solemized on August 31, 1926 at Dresden" and "Mr. and Mrs. Annals will be at home to their friends after Oct 1st at their home on the Wood farm, near Wallaceburg." 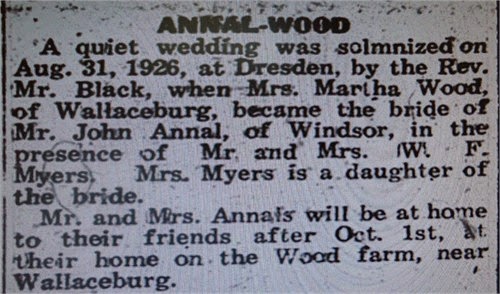 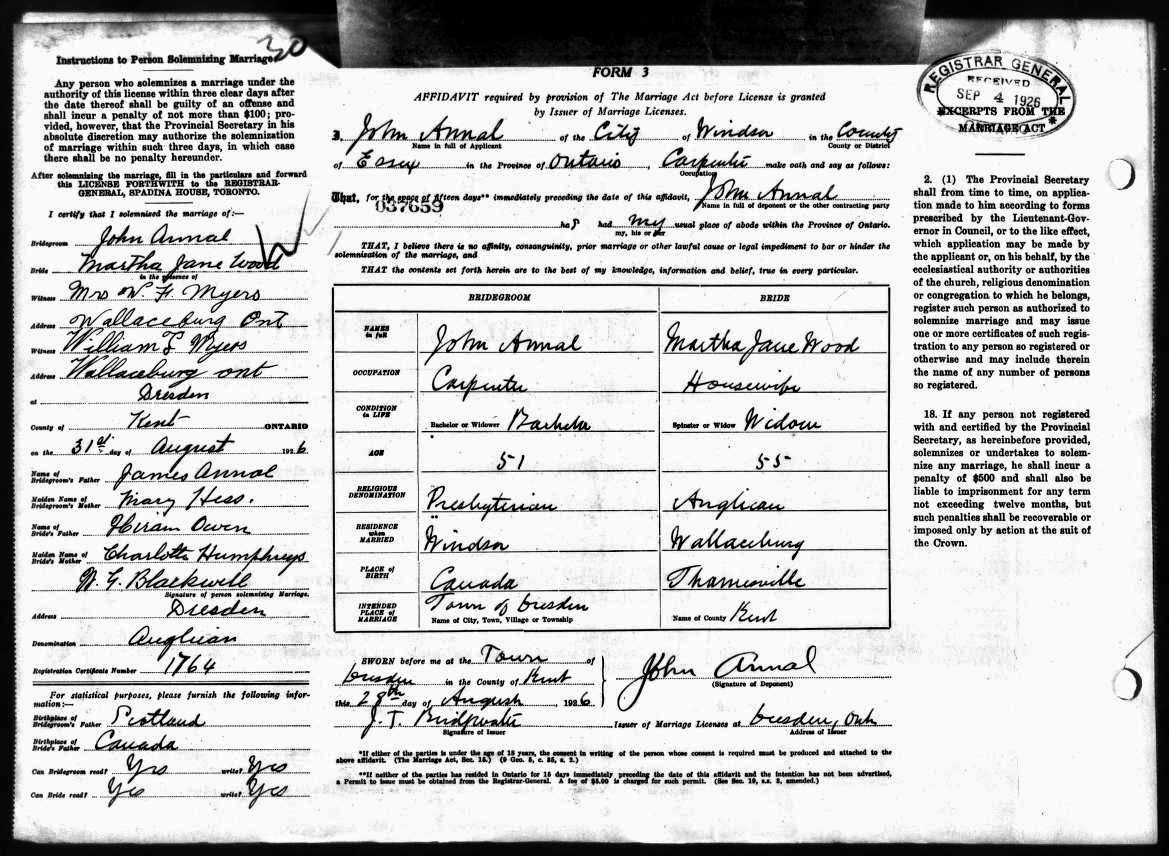 John Annal's mother Mary (Hess) Annal passed away at John's home on the 30th of December 1927. She had been ailing for some time. John's father died in his home as well in 1930. He "had been ailing for the past year and his demise was not unexpected".

In 1955, John's wife Martha Jane passed away. She had been seriously ill for some time and died in the house where she had lived all of her life. According to the obituary (below) Martha was an accomplished poet and song writer!

John was 85 years old when he died. He passed away at the Lapointe-Fisher Nursing Home that was established in 1950.

(Note: When John Annal died in 1960 - Lawrence Coughlin was a flowerbearer: An individual who walks before or behind the casket carrying flower tributes sent to the family.) John is buried at the Riverview Cemetery in Wallaceburg Ontario with many other Annal and Hess relatives.

John Annal, the last of his kin, passed away in the possession of the family bible that he used for a 1949 affidavit to prove the date of birth for my great grandmother Elizabeth (Annal) Coughlin. I wonder where that bible is today?