1891 Census
In the 1891 census, Florence is listed as a scholar meaning at 5 years of age she was attending school. Florence's father is listed as a "Carter". A carter is someone who "carries or conveys goods in a cart".

I have not been able to locate the Curd family on the 1901 census. I did locate some of the family on the 1911 census but by this time both parents had passed on and Florence had left England for Canada.

On the 14 of March 1909, the first child of Florence and John Moreland, Dorothy was born. Pictured below 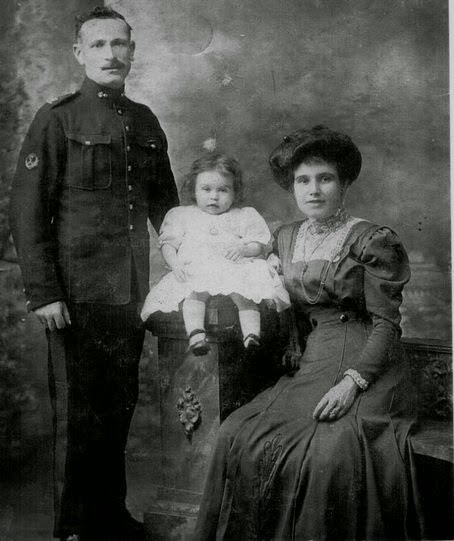 
Florence (Curd) Moreland died on February 3, 1915 of tuberculosis at 29 years of age (see her death certificate below). She had been suffering with the illness for two years.

Florence's two daughters, Dorothy (my grandmother)  and Florence, were removed to a foster home while their father John Moreland was overseas fighting with the Royal Canadian Garrison Artillery (RCGA) as a gunner in World War 1(1916-1918).

Notably, the foster family's home was devasted in the Halifax Explosion but the family survived because they were visiting friends outside the city that day - December 6, 1917.

Florence (Curd) Moreland is one of few women buried at the Military Cemetery in Halifax (Fort Massey Cemetery site 1013) with their son Charles (site no 1175) who died at birth 1 May 1913.

My grandmother Dorothy (Moreland) Creighton visited her Curd relatives in England in 1968.

Here are some photos from Nana's visits to England.

In September 1968, The Curd family reunited with the Canadian Moreland-Creighton clan and one of the "England cousins" drew this lovely family tree as a remembrance of the occasion. I have covered over the names of all living descendants for privacy reasons.

If ever I visit England, I want to have a drink at the Carriers Arms Pub (12 West St Kent) pictured here two doors away from 14 West St where Florence Curd lived with her family in 1891.

The Carriers Arms Pub was established in 1871 and has remained there ever since. When we found the Curd family on the 1891 census, Richard Beechum was the "Beer House Keeper".