I also found myself on a bit of a research tangent on the NBC or "NaBisCo" Building of  Detroit Michigan (where Art Lefaive once worked) which still stands nearly 100 years later and is being restored.


I just love this picture and I think it's because of the beautiful smiles. On closer inspection, the hat has "Dad" written on it and I am wondering if it is actually a cake?


The Nabisco building where Art worked (built in 1920 by architect Albert G. Zimmermann) still stands today and has been taken over by UHaul to be restored to it's former glory. (See the interesting video at this link: https://www.youtube.com/watch?v=XmtsP2t9qnM)

"Built in 1920, this historic seven-story building is the result of the collaboration of Adolphus Green (1843-1917), first chairman of the board and later president of the National Biscuit Company (Nabisco), and his architect, Albert G. Zimmermann (1866-1947). Green wanted factories that would have style and dignity to inspire loyalty from the workers and act as models of modernity to the communities in which they stood.

National corporations were in their ascendancy at the turn of the century and architectural uniformity was a new concept for the time. The Nabisco buildings were different from the common manufacturing buildings of the World War I era. Each of the new plants included showers and locker rooms for the employees as well as fireproof stairways and other up-to-the-minute fireproofing techniques.

The factories were twice published in the American Architect magazine in 1912 and 1916 for their trendsetting fire-safety measures including the steel framing and fireproof tiling, and their use of 1-1/2” maple flooring and architectural embellishments above and beyond the normal requirements for factory buildings." Source: http://blogs.uhaul.com/detroit/ 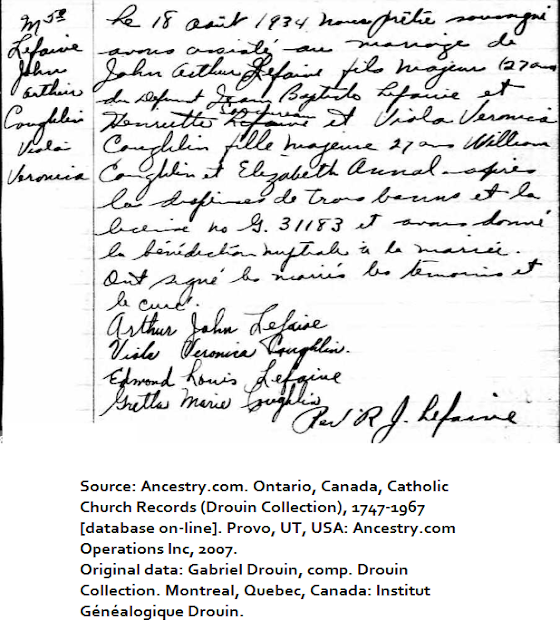 In the year that she was married (1934), we know from the Border Crossing card below that Viola was employed at Parke Davis & Co. in Detroit Michigan. Viola's sisters also worked there. Viola worked as a "drug finisher". 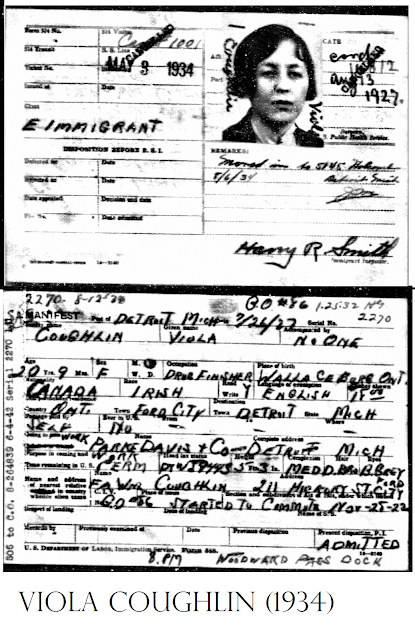 In 1940, according to the census, Viola and Art Lefaive were living in Detroit, Michigan with two children (4-year-old daughter Joan and 2-year-old son Richard) and Art was working as a delivery person for a retail bakery.

Arthur J. Lefaive died in Detroit, Michigan in 1996 and is buried at Heavenly Rest Cemetery. His son Richard and Gerald survived him and he had four grandchildren and two great-grandchildren at the time of his death.