She died just a couple of weeks after my grandparents were married (November 27, 1929). Madeline's daughter Eileen (the eldest) was the flower girl.

What had begun as an ear ache developed into cerebral spinal meningitis and Dr. McGavin of Hotel Dieu attended to Madeline from December 3 to December 10 when she succumbed to the illness on December 11, 1929.

Grandma Elizabeth (Annal) Coughlin cared for her and all four children while she was ill. My grand aunt Betty Harrison told my cousin Gail Kinsel that Grandma Coughlin "made sure that all of Madeline's children had a joyous Christmas and that all of the children got gifts from Santa."

What a difficult year it must have been for those children and her husband Joseph Demarse.

Mary Madeline Coughlin (my grand aunt) was the first born child of William and Elizabeth (Annal) Coughlin and she was born on the 4th of September 1900 in Wallaceburg, ON, Canada

In 1901, Madeline was living with her parents (William and Elizabeth) in the home of her grandparents, James Henry and Mary (Hess) Annal in Wallaceburg, Ontario.

Madeline's father (glassblower William Henry Coughlin) had just emigrated to Canada from Poughkeepsie New York in 1899 and Madeline's parents were married (November 27, 1899). By the time the 1911 census was taken, the family was found in their own home and Madeline now had four sisters! 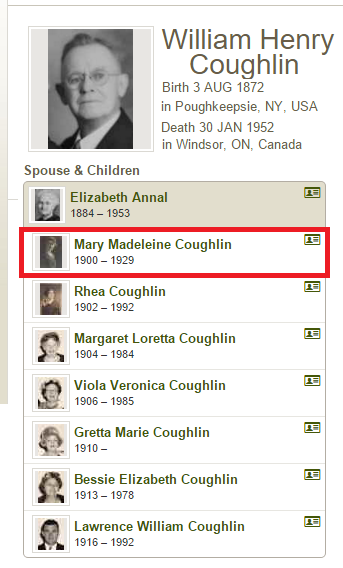 By 1917, the Coughlin family was complete with a baby boy and brother for the Coughlin sisters Lawrence William (1916-1992) shown below on his father's lap.

On November 17, 1920, 20-year-old Madeline married the 24-year-old Joseph Demarse who was a machinist from Stoney Point, Ontario.

Madeline's occupation listed on her marriage certificate says she was working as a bookkeeper.

From this union, four children were born:


When researching my family history, I am always sad to read the details of ancestors whose lives were cut much too short like Madeline's.

And poor Joseph Demarse and these children to have lost their wife and mother so young was tragic enough but to lose her so suddenly and so close to Christmas,

It is heartwarming to know that "Lizzie" (Annal) Coughlin and the extended Coughlin family made sure that the Demarse family had a joyous Christmas that all of the children got gifts from Santa.

Madeline is buried at Heavenly Rest cemetery in Windsor, Ontario