Agnes is a unique "double cousin" as we were related through both the Brodericks and the Moynahans.

I decided to make this blog post about her because, like her grandfather Martin Broderick (1839-1915), I recently located new documents about Agnes in the Detroit Free Press archives.

Agnes' mother Clara (Moynahan) died in 1919 at the young age of 37 years (after a lingering illness) leaving her husband Patrick with five children aged 18 months to 15 years. Agnes was the eldest. 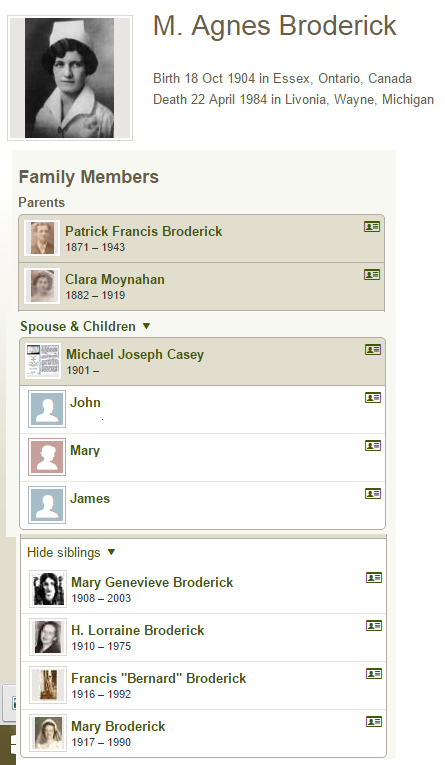 At 21 years of age, Agnes (who was working as a nurse) married Michael Joseph Casey who was born in Armascaul, County Kerry, Ireland

The church that they were married in was called, "Our Lady of Prompt Succor" which is unfamiliar to me. I found it interesting that it was later renamed by Fr. Rooney in 1943 to "Holy Name of Mary Church" due to problems pronouncing the name (and the youth of the Parish disliked being referred to as Prompt Suckers).

Holy Name of Mary Church on McEwan Street celebrated its last Sunday mass in June 2012. The Church was founded on May 17th, 1917 and was originally called Our Lady of Prompt Succour.  Michael and Agnes would have been married at the first church which was located at the corner of Curry and Martin Avenues. The second church (on McEwan) was built in 1927.

The census records tell us a lot. In 1930, Michael and Agnes had two children: John and Mary and they owned the house they lived in which was valued at $8000.00.

Also, Michael's brother John (single, 24 years old, also from Ireland) was living with them at the time.

Agnes is shown as not having an occupation though we know that at the time of her marriage she was a nurse. She is home taking care of the two children (John 3 6/12 and Mary 2 2/12) and a third child, James Patrick, would be born in 1936.

We know (from the obituary below) that Agnes retired from nursing at Mt Carmel Mercy Hospital in 1966 after 23 years in a supervisory post.

There are no other nurses in our Essex county relatives so Agnes is unique. I can't help but wonder what drew her to become a nurse? Was it her mother's lingering illness and death that she witnessed at the young age of fifteen? Did she have an experience in her younger years? It would be wonderful to know.

Michael and Agnes lost their last born child, James Parick Casey, in 1975 at the age of 37 for reasons not known to me.

This is the Detroit Free Press news clipping that inspired this post. I only knew that Agnes was a nurse but knew nothing about where she nursed or when. This was a delightful find!


I could not find a headstone online for the Caseys because the Holy Sepulchre Catholic Cemetery is only half photographed to date (at 53% of the 16,479 interments).