Thanks to Michigan Family Trails, I spent the day searching through the Detroit Free Press (DFP) and found some incredible articles that I will be sharing over the next little while.

Michigan Family Trails announced that the DFP was available online from 1837 to September 2015. http://freep.newspapers.com/ I signed up immediately for the monthly subscription option for $7.95 and within minutes I had found many articles on my Detroit Moynahan ancestors.

A surprise came when I came across an article on Page 11 from the DFP on Tuesday, October 12, 1915 about my great great grandfather Martin Broderick.


I had written about my great great grandfather Martin Broderick (1831-1915) three times before:

I had only ONE picture of him (a crayon portrait) and an obituary from the Essex Free Press (Oct 15,1915) 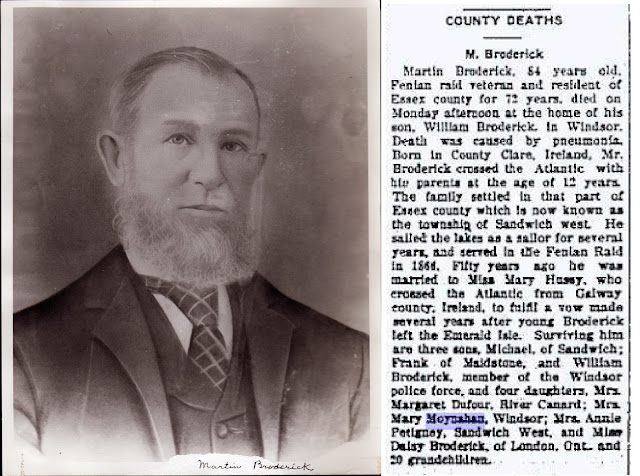 The Detroit Free Press had a photo I had never seen before and extra information about Martin's life that was not known to me previously.

What a wonderful ancestor treasure to find on the 100th anniversary of Martin Broderick's death.
Posted by Cindi at 4:03 PM