I have written previously about Bernard Broderick who I met in November 1987. The transcript from that brief meeting has proved to be invaluable to me in my Broderick family history research over the years.

Recently, my sister Kelly gave me a new document written in 1992 for Bernard Broderick's memorial that fills in a lot of the gaps in my earlier research.

The Memorial document stated that Bernard entered the Juniorate at De La Salle College, Aurora in 1929. He was born in 1916 so he was thirteen years of age. His mother Clara (Moynahan) Broderick died ten years earlier when Bernard was only three years old on December 12, 1919.

It's important to differentiate between the Brothers' vocation and that of priesthood. The Brothers' life is centered upon community life and educational ministry. They take the traditional religious vows of poverty, chastity, and obedience, along with a special vow of association for the educational service of the poor.

Boys enter the Juniorate usually with Grade 8. When Bernard received his Senior Novitiate he took the name Brother Berchmans.

What surprised me most about Brother Berchman's memorial document was that I learned for the first time that:

Bernard is pictured below in 1989, two years after I met him at LaSalle manor in Scarborough, Ontario and after he had a new stone made for his parent's grave in Maidstone, Ontario. 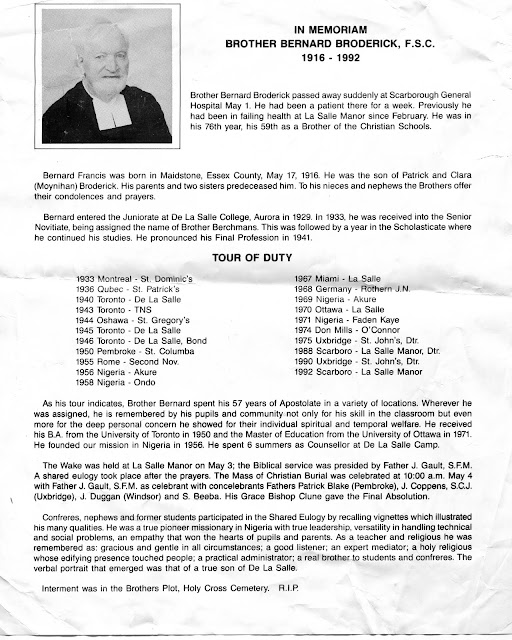 My previous posts about Bernard Broderick:


Other links of interest:
Posted by Cindi at 8:18 AM