52 Ancestors No. 33: The Landers Brothers Part I

This is the story of my stepmother's cousins the Landers brothers.

I learned that both men were convicts in the Canadian penitentiary system, activists in the struggle for Prisoners Rights in Canada and both died in the prisons that held them: Bobby died in the segregation unit of Millhaven prison in 1976 and Glen died while attempting another escape in 1977.

Prisoner's Justice Day in Canada is held every August 10th and three people’s deaths: Eddie Nalon’s in 1974, and Bob Landers’ in 1976 and Glen Landers’ in 1977 mark the passing of respected men who stood up against a dangerous and unaccountable prison system. Genealogists inevitably come across black sheep in their family tree and as the story gets passed along through generations it often becomes diluted. In the case of the Landers brothers, they were remembered as convicts but the details of their fight to improve the brutal conditions that existed in the prisons in the 1970s was not known.

There are so many more details to the Landers brothers' story that have yet to be found. This is Part I of their story.


Mary, Glen and Robert were the children (born in Pontiac, Allumette Quebec) of Henry Edgar ("Harry") and Mary Ethel ("Ethel") (Carroll) Landers. (There were other children, this is still being researched) Ethel (Carroll) Landers "worked as a nurse in women’s prisons across Canada including B.C. where the Doukhobor women were being held. She trained in a post WWII Ottawa hospital, the Royal Ottawa I believe. Her first child, a daughter, was born developmentally delayed, and later died." (Source: Ritual Abuse)

According to the Gazette, in 1973 Glen Thomas Landers was serving a four year sentence with a year to go because "He had this bad habit of walking into a bank with a gun and running away with other people's money" (Source: Montreal Gazette Sept 29,1973)

From the Gazette article we also learn that Glen Thomas Landers was six feet tall, 146 pounds, smoked forty cigarettes a day and took medicine for his nerves four times a day.

" In 1977 – Glen Thomas Landers died after being shot off the perimeter fence and left to bleed to death. Glen was also serving time in Millhaven when his brother Bobby died the year before. Glen had to struggle with being around the same guards who had allowed his brother to needlessly die, alone and suffering.

Within a year Glen and a group of other prisoners had planned to escape Millhaven. They managed to cut the security bars over a window in the common room area. However, on the night that Glen and the others had decided to escape, the Special Handling Unit (SHU) guys had refused to go back into their cells at the end of their exercise period. While this may (or may not) have been part of an orchestrated diversion for the escape attempt it had resulted in a police presence around the SHU yard which was in the front area of the Millhaven compound......

As time goes by we begin to think of people as historical and we don’t pause and consider their lives and their feelings, their desires, hopes and dreams. I was recently speaking with Barbara (Bob and Glen’s younger sister) and she told me how poetry and drawing were very important to her brothers. After all these years she and her family still had questions and still struggle with the heavy weight of loss and sorrow." (Source: Prisoner's Justice Day)


"Glen’s poems were so prescient, and powerful — and I learned more about him at the ICOPA conference at Ryerson University in Toronto ..... I didn’t realize the impact that he had on the political advocacy and prison movement in the seventies until meeting a Dr. Bob Gaucher, University of Ottawa, who had been incarcerated as a young man with Glen and Bobby in a Saskatchewan federal prison."

"He wrote about one hundred of them altogether". 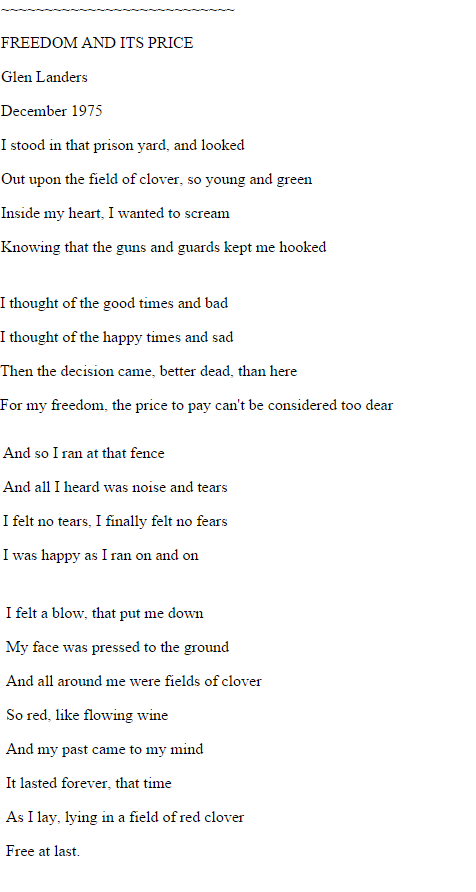 Bobby was very active and outspoken in the struggle for Prisoners Rights. He had been doing his time at Archambault Maximum Security Prison, near Montreal, Quebec. He was on the Inmate Committee at Archambault, where prisoners were in the process of organizing a prisoner strike to better conditions inside.

Bobby was involuntarily transferred to Millhaven just before the strike in January 1976 and thrown into the Hole.

"Bobby was placed in punitive isolation as retribution for his continuing efforts to get better living and working conditions for prisoners. Bobby was working with other prisoners in Millhaven to arrange a work stoppage to protest the intolerable prison conditions and to call public attention to the treatment they were receiving.

In the manner typical of the Millhaven administration, prison guards perceived the efforts to generate positive change for prisoners as a danger to their status and used punishment to deal with the prisoner’s efforts to form some kind of union.

Back in those days the CPS had recently been compelled to accept the formation of Prisoners’ Committees at each prison and there was considerable animosity between the Guard’s Union and the Prisoners’ Committees and Prison administrations. There were often running conflicts that escalated into serious incidents with each side blaming the other.

Bobby and others were thrown in the hole in a move designed to stymie efforts to improve working and living conditions. Prisoners, who were also in the hole, heard Bob calling out to guards that he was in trouble and experiencing serious chest pains.

After some time passed, a guard actually did show up in front of Bob’s cell and asked him what he wanted. Bob explained and pleaded that he needed to go to the hospital but the guard just told him to wait for the nurse to do her nightly rounds.

When the prison nurse did show up she didn’t conduct a real assessment, and simply refused to have him brought to the hospital, telling him to wait until the doctor came in the following day.

That night, after scrawling his symptoms on a piece of paper, Bob died from a heart attack in those same isolation cells.

It turns out that the emergency button alarm and all the subsequent banging and screaming from other prisoners were ignored by the guards in favour of their nightly poker game.

At the coroner’s inquest it was established by a heart specialist that medical negligence killed Bob and he should have been in an Intensive Care Unit and not in solitary confinement." (Source: Prisoner's Justice Day)