Sometimes genealogical research has you going in circles and sometimes on the second or third time around in the same circle you discover something new.

Such is the case with my first cousin (4x removed) Mary Moynahan of Essex county who married Mathew J. Moynahan of Ireland.

When I was researching the beautiful zinc Moynahan headstones at Mt Elliott cemetry, I had no idea I would eventually return to Timothy Moynahan (1813-1902) of Maidstone, Essex county. I also had no idea that this research would take me into Corktown, Detroit and connecting with researcher Paul Szewczyk and learning about 19th century Corktown's tradition of female home ownership.


Mary Moynahan was born in Maidstone, Essex co., Ontario on the 15th of October 1847 the daughter of Timothy and Margaret (Cronyn) Moynahan

When Mary's father Timothy died in London, Ontario in 1902, his obituary stated that of his nine children from both marriages, only two were living: Enos and Mary (who is the subject of this post).

The obituary failed to mention another living child Timothy who was at the London Asylum at the time. I suspect that Timothy died in London, Ontario beccause he was visiting with Timothy Jr in the London asylum and died there. I have no proof of this but I also have no idea why Timothy would travel to London, Ontario at 89 years of age?

I also have no explanation regarding the omission of Timothy Jr from Timothy Sr's obituary?

Matthew James (M.J.) Moynahan of Detroit was born in Ireland in 1836 the son of Jeremiah Moynahan and Catherine Hearlihy.

Catherine ("Kitty") was the only surviving child from M.J. first marriage. On the 20 Jan 1879 Margaret (Maggie) was born.

Corktown, Detroit is located just west of Downtown Detroit, and is the oldest extant neighborhood in Detroit, Michigan 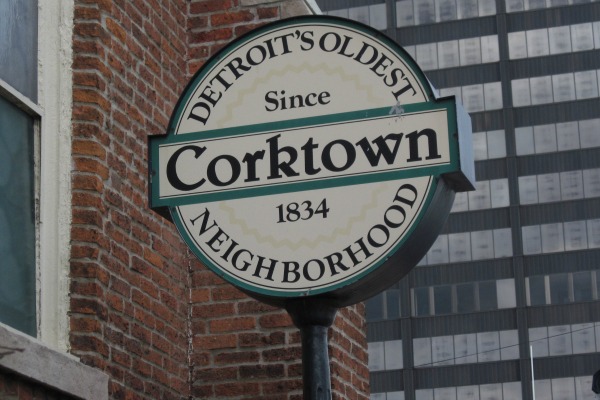 
According to Paul Szewczyk

"Rose Lane sold 11 Baker street to Mary Moynahan for $3,350 in July of 1882. This is an example of 19th century Corktown's tradition of female home ownership. In Irish households at the time, wives were in charge of the domestic finances, and property was often held in their names."

"The home's new owner, Mary Moynahan, was a first-generation Irish-Canadian, born in Ontario in 1846. Her husband, Matthew J. Moynahan, was an Irish immigrant. The couple married around 1876 and had two children. Two years after moving into the home, Matthew Moynahan passed away. Mrs. Moynahan was listed at 11 Baker Street through 1887, after which she rented the house to Martha Fessenden, a widow. One of Mrs. Fessenden's son's, Mark, died at the home on February 15, 1889, at the age of 26.

Other boarders listed at this address in 1887 and 1888 included Thomas W. Richardson, a porter for Thorp, Hawley & Co.; Walter Parrish, a lineman for the Brush Electric Co.; and Frank Hutchinson, a clerk."

This brings me back, full circle, to the beautiful Moynahan zinc marker that I wrote about in July 2014.

Mary was interred here on the 11th of April 1905 with M.J and his first wife Hannah and all of their children.

The last person buried in this plot was Kitty Moynahan (1858-1938) a retired school principle who was daughter of M.J. Moynahan and the only surviving child of his first marriage.