First of all, up front, I must state that I have not established any relationship with the following Moynahan family whatsoever.

My ancestor Denis Moynahan is buried in the Mt. Elliott cemetery in Detroit, Michigan. When I researched the surname "Moynahan" at Mt. Elliott cemetery, I discovered many Moynahans. I believe that some of these Moynahans may be related but I have yet to locate source records to prove it.

Today's post is dedicated to the Moynahan family that belongs to this incredibly beautiful zinc headstone.

According to waymark.org: Zinc, or "White Bronze" headstones can be found throughout North America, and are easily recognized by their bluish-gray color, and raised lettering.

"They are rare in that they were only produced from the mid 1870's through 1912, and only by one company. All of these markers were produced by a company founded in Bridgeport, Connecticut. In 1881 Bridgeport set up its first subsidiary, in Detroit. Later, it also opened plants in Philadelphia, New Orleans, St. Thomas, Ontario, Des Moines and Chicago.

They are made of cast zinc, which allowed them to be produced and shipped around the world less expensively, as compared to more traditional stone monuments. Unfortunately this was also their downfall. Many people felt that because they were so inexpensive, that it would not be proper to remember their loved ones with such a monument. The headstones eventually gained the euphemism "White Bronze," in place of “zinc,” by sales people who wanted to make them seem more attractive to the public.

In purchasing one of these, a person would select a general monument type and style. They then could customize all of the four sides of the monument, if they wished, with a plate which was screwed to the headstone using decorative screws. The plates typically list the name of the deceased, along with date of birth, date of death, and relationships to others who may be buried in the same plot."

Based on the information above, could it be that M.J. Moynahan waited ten years before he purchased the headstone?

From my research on the Moynahan family that belongs to this marker I have learned that M.J. (Mathew) Moynahan was postal worker. I found him in the 1855-56 Polk's Detroit City Directory and the 1861 Detroit Directory. He is found in the "Post Office Department" and in the general directory as a postal clerk.

I am assuming that Hanna had died as a result of complications in childbirth delivering the twins (who both die shortly thereafter). (There is an entry that looks like it says "cholera" on the twins cause of death on page 2 - but it is barely legible)

For M.J. the deaths of his entire family between 1870-1872 must have been devestating.The beautiful markers he had made for each of them can be seen in detail below. I have not found M.J.s death record. 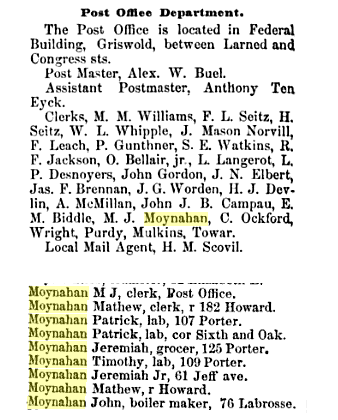 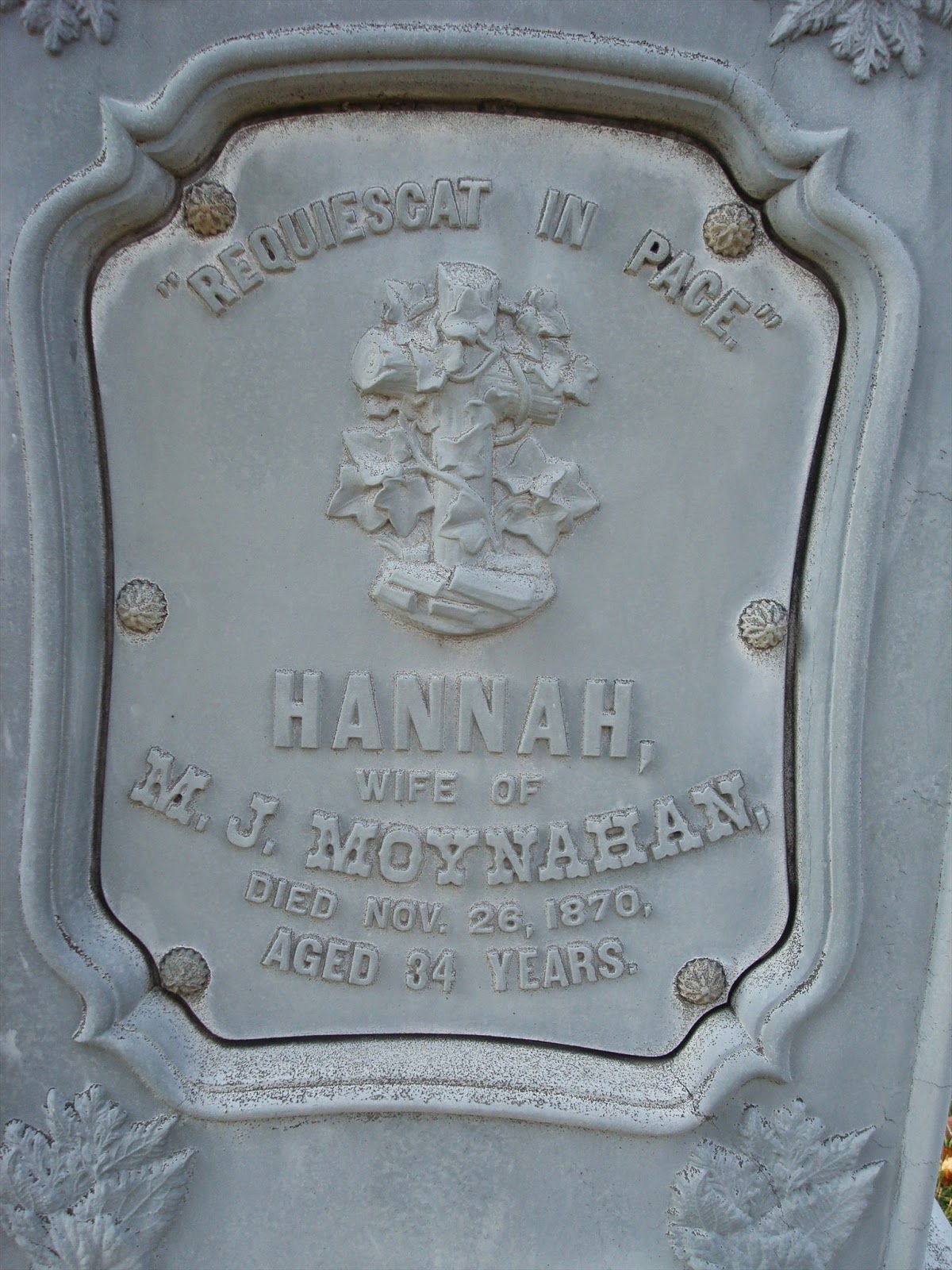 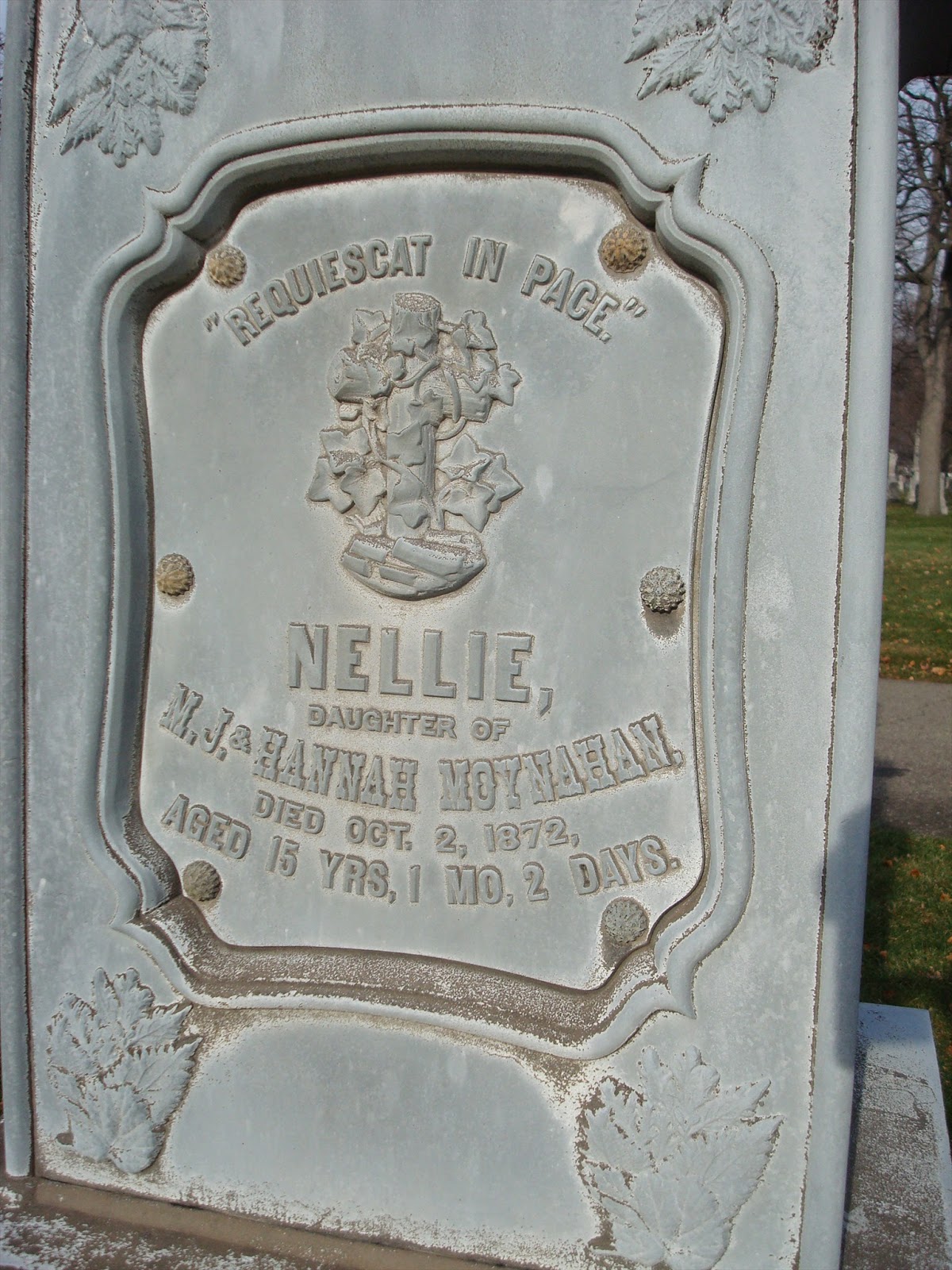 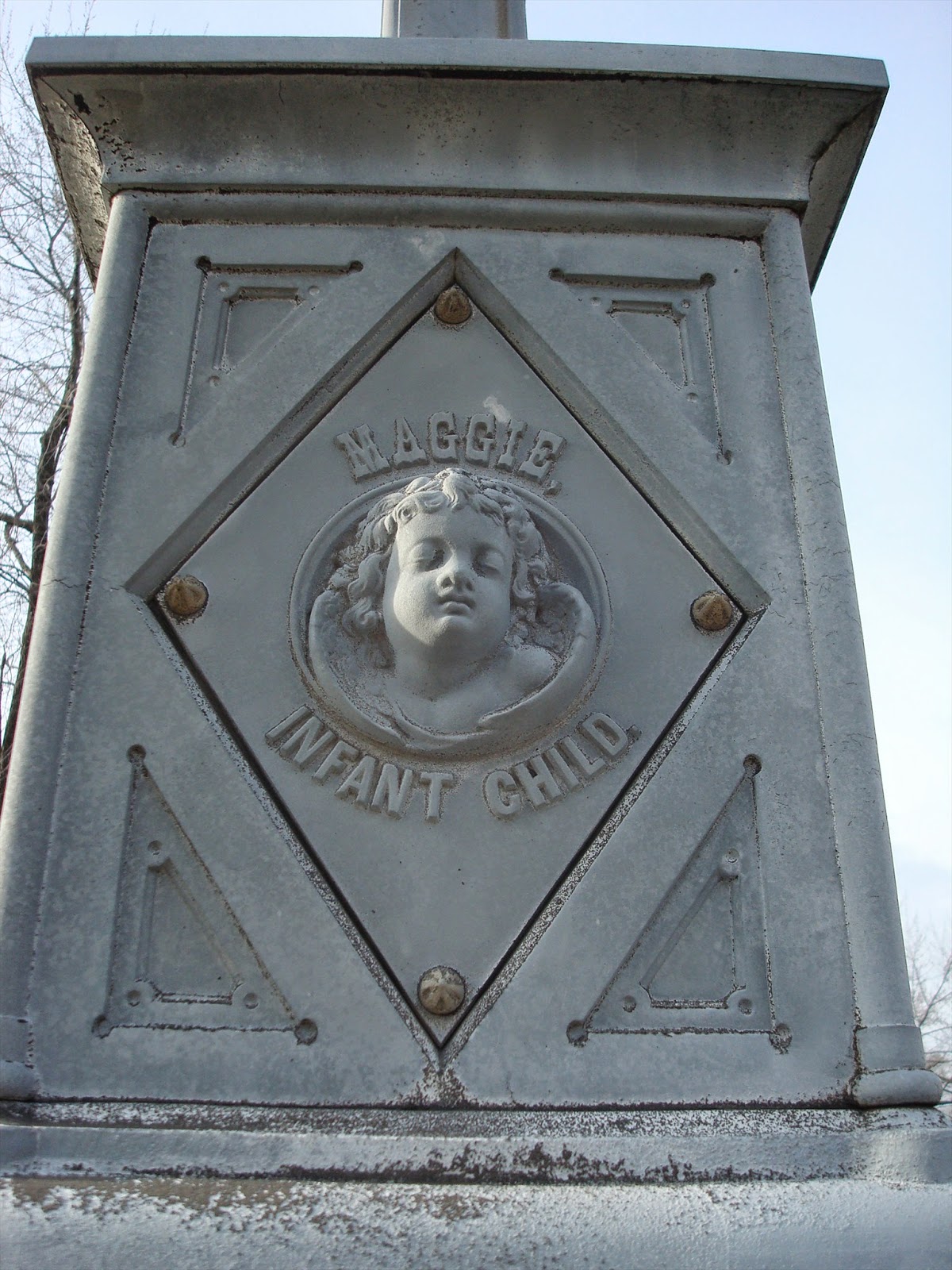 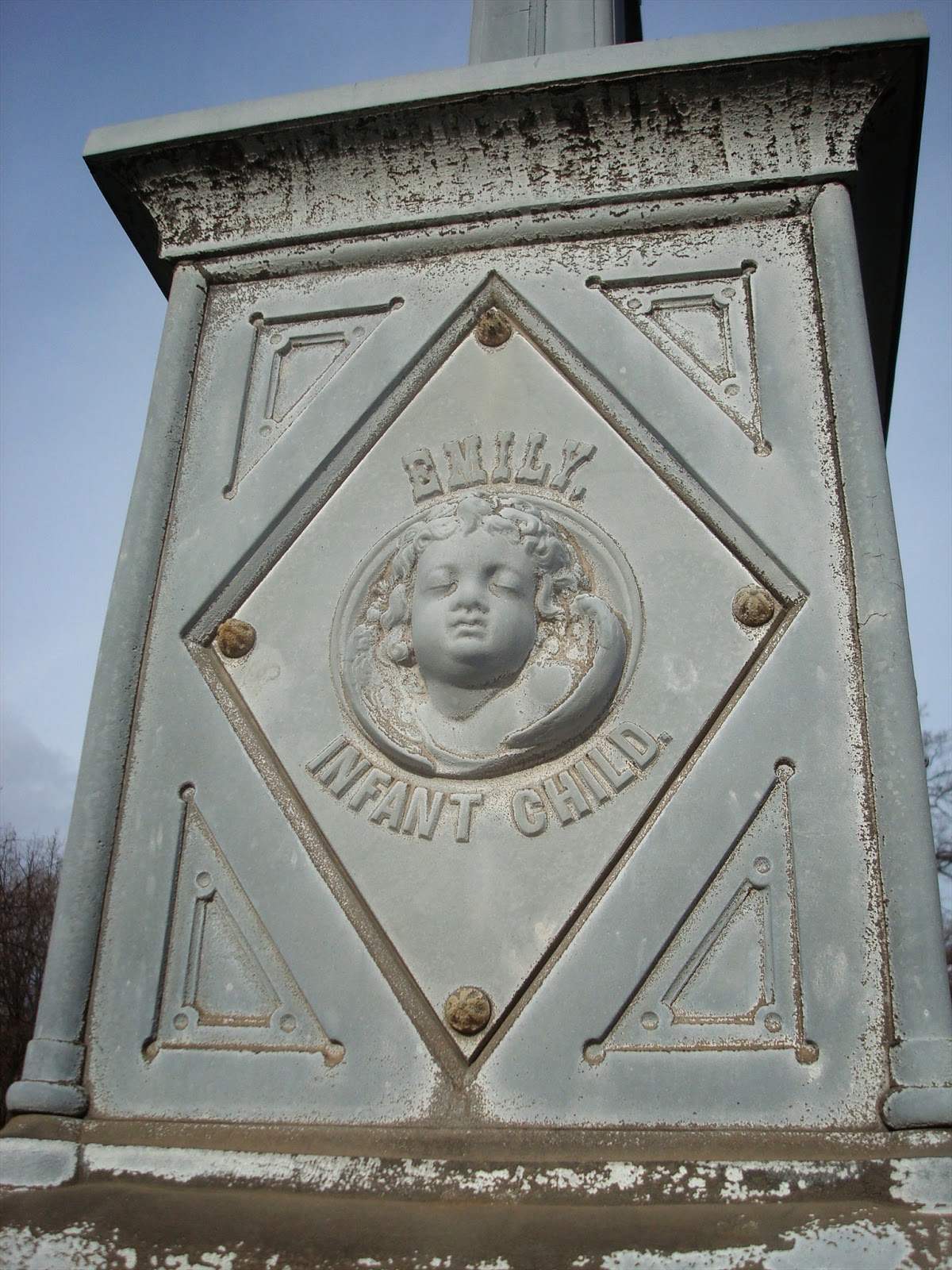 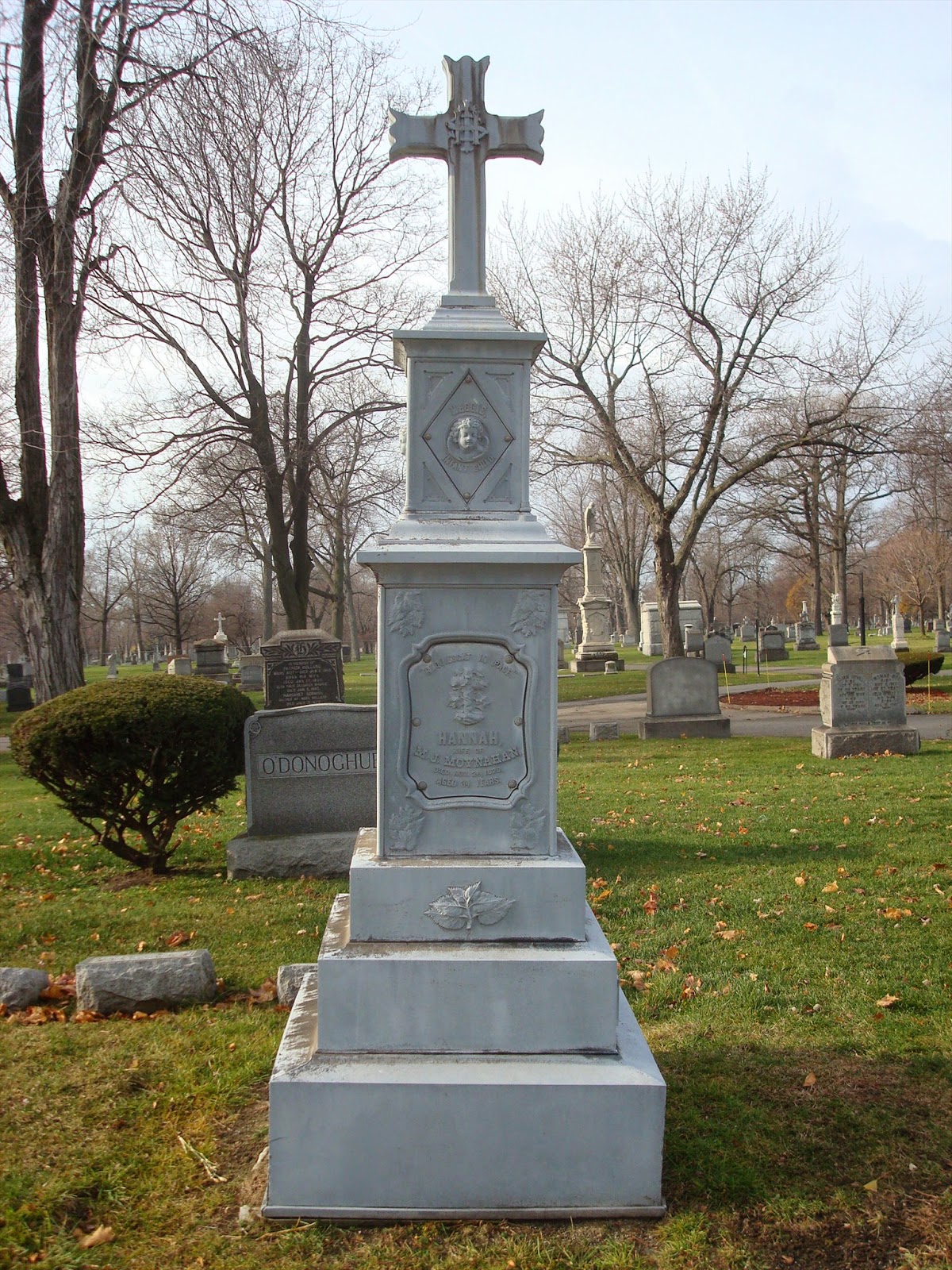 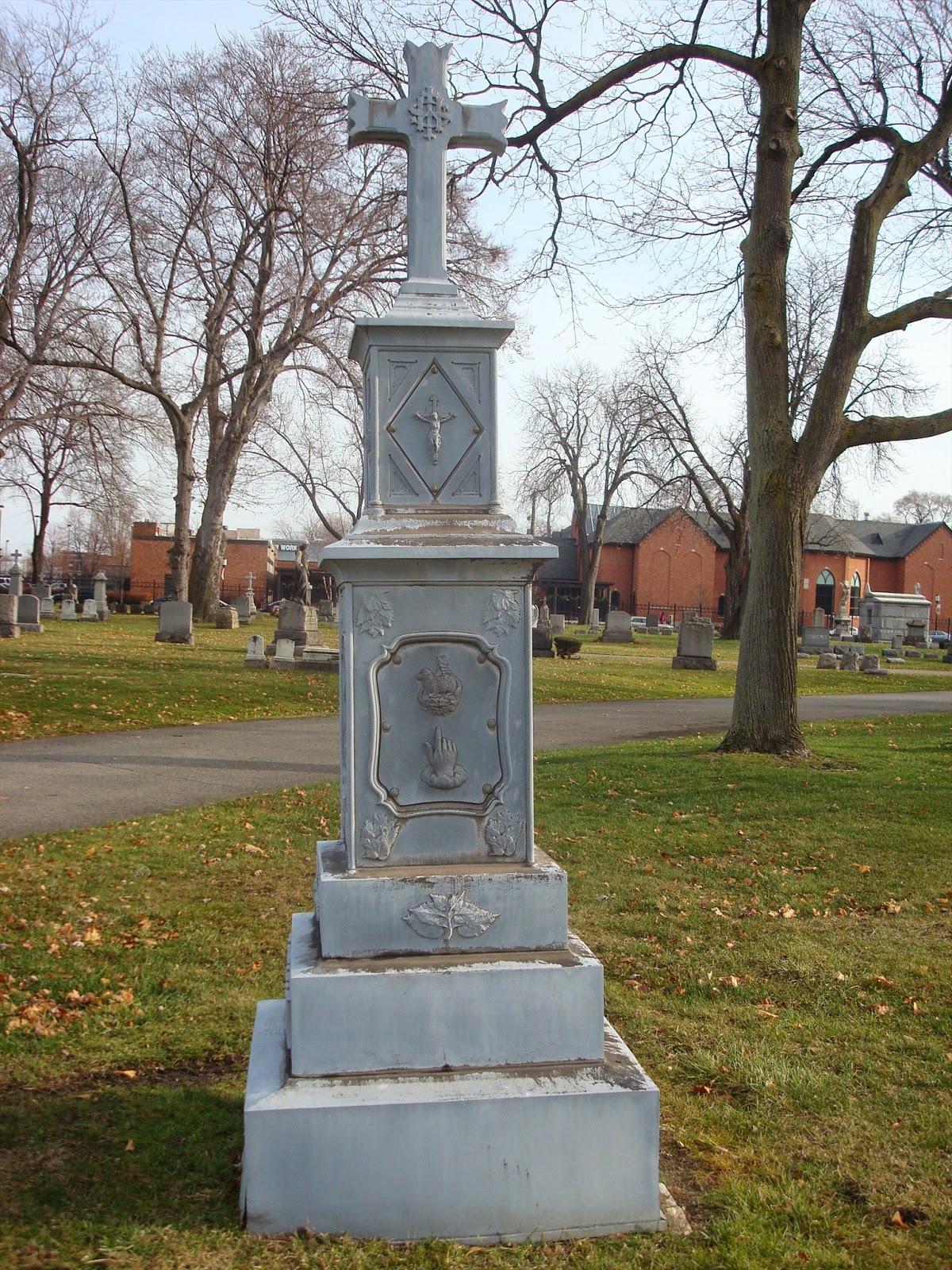