52 Ancestors No. 51: The Broderick-Murray Wedding

I was quite excited to locate a Border Cities Star article dated January 5, 1935 that had the Wedding announcement of Mary Margaret Broderick (1911-1994) and John Charles Murray (-1995)


"Mr. and Mrs John Charles Murray, JR; whose marriage took place this morning at Immaculate Conception Church, are shown with their attendants immediately following the ceremony. From left to right are Miss Marcella Broderick, maid of honor; Mrs Murray, the bride, who was before her marriage Miss Madeline Margaret Broderick; daughter of Mrs. Clara Broderick of Marentette Ave and the late Leo Broderick; Mr Murray, the bridegroom, son of Mr and Mrs Charles Murray of Church street and Mr. Raymond Marcotte, best man. Mr and Mrs. Murray will take up residence on Church street following their return from a motor trip to New York City. Mr Murray is physical training instructor at the Windsor-Walkerville Vocational school.

I wanted to include this beautiful photograph of this most gorgeous child - their son Donald Murray. 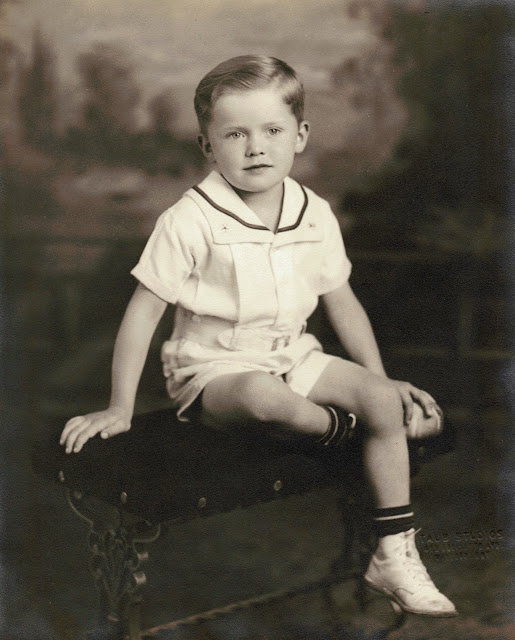 I am fortunate to have connected with some Broderick-Murray distant cousins through my genealogical research. That is why I enjoy doing genealogy so much. You meet wonderful relatives that you never knew you had!
Posted by Cindi at 6:25 AM