Thanks Amy Crow for 31 Days of Genealogy

It's Day 31 of Amy Crow's "31 Days of Genealogy" and I am incredibly grateful that Amy's emails have appeared every day for last thirty-one days in my inbox! And for FREE!!

Amy Johnson Crow is a Certified Genealogist with more than 20 years of experience helping people discover their family's history. She is also the creator of the #52Ancestors challenge which has, for the past two years, taken me to new levels with my genealogical research, led me to new relatives and made me dig deeper into my own family history. Amy has inspired so may of us to do more research, better research and tell our family stories!

Before Amy sends her final email to my inbox tomorrow, I wanted to thank her and Amy has assigned her readers a final task:


"Pick one of your favorite ancestors. Get out all of your notes about that person. Sit down and write at least 3 paragraphs about that person. (I'm not even asking for a full page!) I bet you'll see that this exercise not only ties everything together, but sparks your imagination for more research."

I feel a connection to these two ancestors that I can't explain. I loved hearing the stories about them that have been passed through the years.

With thanks to Amy Crow, here are a few paragraphs on Jeremiah and Mary (Brennan) Moynahan.

At the beginning of my genealogy journey back in the early 1980s, the first time that I saw the image below of Jeremiah and Mary with my great grandfather John Moynahan, I cannot even describe how I felt. Their eyes. The way they were dressed. Imagining their lives. The photo inspired me to dig even deeper into the archives.

The picture above would have been taken in the late 1860's. Jeremiah and Mary would have been in their late twenties and just starting what would become a family that would include nine children (Mary would be pregnant into her forties, the last baby born Maud Agnes (Moynahan) Flannery in 1884.)


After their marriage in 1863, Jeremiah and Mary lived at 298 South Talbot Road in Maidstone (Township of Sandwich East in 1867) until 1922. Pictured above on google maps, it remains farmland to this very day.


Jeremiah was born on his parent's Denis and Catherine (Roach) Moynahan's farm at 6 South Middle Road, Maidstone on March 22, 1837, in Maidstone Ontario," in the year of the Rebellion of Upper Canada" (Source: The Border Cities Star - Jun 21, 1922 ) .


Jeremiah's parents, Denis and Catherine, were born in County Kerry Ireland and migrated to Canada in the early 1830s (They were married at Ste Anne's Church Detroit in 1833).

In 1913, Jeremiah and Mary celebrated their golden wedding anniversary by holding a family reunion where the family attended mass then had a party on their Maidstone farm. "The old couple were the recipients of many appropriate presents and congratulations on this occasion" (Source: The Essex Free Press: November 21, 1913, Page 1 of 8)

In June 1922, Jeremiah and Mary "decided to spend a few weeks with their daughters in the country. Mrs. Moynahan going to Mrs. Flannery's in Colchester North and Mr Moynahan to Mrs. Alex Jobin's Con. 9, Sandwich South. It was at Mrs Jobin's that his passing away took place on Tuesday night. Deceased was about as usual during the day and did not complain of any ailment and retired at 8 o'clock that night. About 10, when Mr and Mrs Jobin retired, they looked into his room and were surprised that he slept away without making a struggle. Death was due to heart disease." (Source: Essex Free Press June 23, 1922, Page 1 of 8)

There is still so much more to learn about the lives of my ancestors. Thanks to Amy Crow, I have learned a great deal so far. 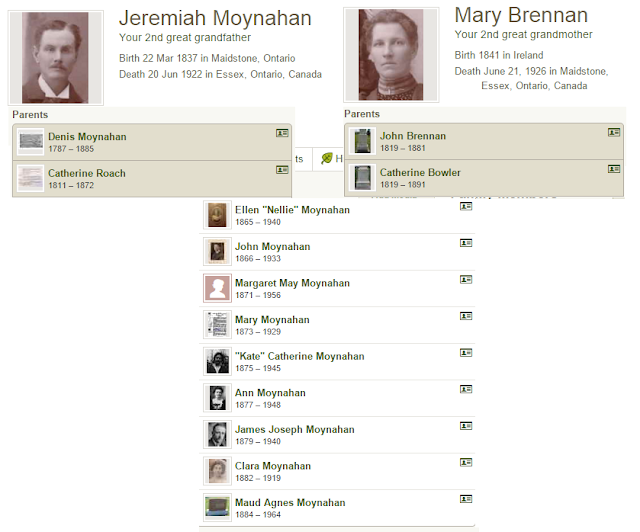