52 Ancestors No.28: The Irish Brogue and French Priests

The Moynahans of Essex county arrived in North America in the late 1820s (first in Pennsylvania) and settled in Ontario and Michigan in the 1830s.

Finding records of the Moynahans in Ireland has been difficult for two reasons:


The French Churches of Detroit

"Before the Irish immigrants had their own church in Detroit they were invited to celebrate Catholic Mass at St. Anne's on early Sunday mornings before the French service began at midday." (Source: Detroit News: "The Irish Helped Form Detroit For Centuries")


In the translated record below, it becomes "parish of Kilcrohane Kerry, Ireland"?

Clairifying "Kilcrohane", "Himiguenay" or "Hinneguenay" became important with the historic July 2015 release of 300 years of records by the National Library of Ireland (NLI). There are 370,000 digital images from 1,086 parishes ! Which parish was I going to enter?

I left a comment on the Blog 'Kerry Catholic Parish Registers' and the blog owner wrote to me "I am not sure that the Moynihans are from Kerry. You mention 'Kilcrohane' and that is County Cork. However some of the Cork parishes are located in the Diocese of Kerry."

This was helpful. I thought I should start with Kilcrohane records. I started with Kilcrohane (though not in County Kerry) which I learned was a variant of Muintervarra and was happy to find some Moynahans there! 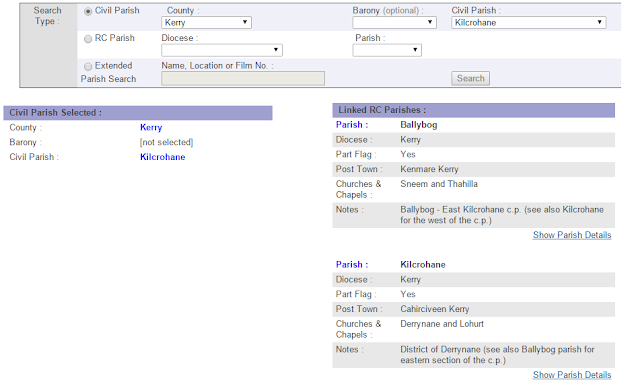 My instincts tell me that County Kerry is where I need to be looking. The "looking" part is a "bit of a slog" but worth it. I will keep going!