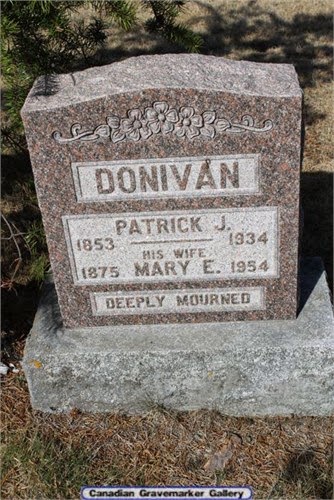 No Story Too Small has issued a New Year's Challenge: "Have one blog post each week devoted to a specific ancestor. It could be a story, a biography, a photograph, an outline of a research problem — anything that focuses on one ancestor.”
I have just started genealogical research on my husband's family.
This weeks blog post is dedicated my husband's matrilineal ancestors starting with his grandmother Bernadette Zeta (Donivan) Plaus. Bernadette's father Patrick Donivan (1853-1934) was a blacksmith in Osgoode Station (1887-1889).
Earlier Patrick Donivan had married Mary McGalvey with whom he had three children. Mary (McGalvey) Donivan later died in childbirth and Patrick then married Mary Elizabeth O'Leary. The couple had fourteen children living in various locations throughout Quebec and Ontario: in Gatineau Qc (1893), McFarlane Qc (1896), Madawaska (1898), Nipissing, Ontario (1900) and finally settling in Chapleau, Ontario in 1904 where Patrick worked on the railway (C.P.R.).
Mary Elizabeth (O'Leary) Donivan also lovingly raised Patrick's children from his previous marriage.
Mary Elizabeth (O'Leary) Donivan
with her
sons and grandsons