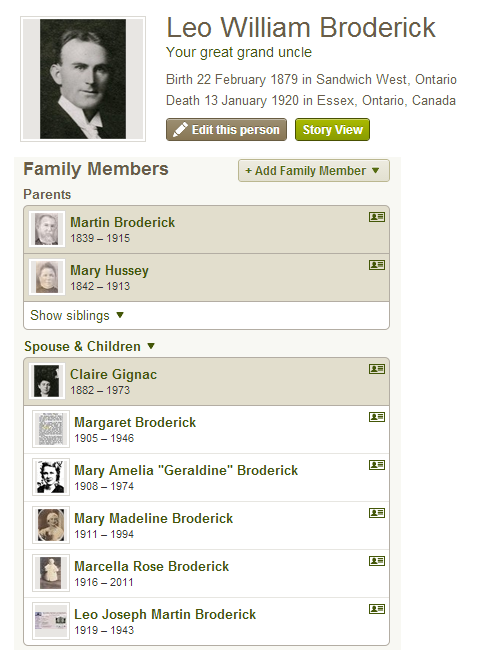 Leo William Broderick (aka "Willie") was selected in 1913 from twelve applicants, to act as patrolmen on the Windsor police force

The officer pictured in the middle of the road (below) is William Broderick, recently appointed to the force and it was his job to keep the taxis lined up and "he handled the job to perfection"

One of the famous trials that Detective Broderick was associated with was that of  John Hogue (alias James Steward) accused of  murdering Deportation Officer Marshall Jackson on the 25th of January 1917.

Hogue shot Jackson on the train as it was entering Windsor and escaped by jumping off the train while it was moving. Two days later Hogue entered the Essex House and registered for a room as George Emmerson of Chatham. Detective William Reid was made aware of someone matching the description at the Essex House.

The Windsor Police have produced an historical book that is available online. Some interesting facts relative to Detective Broderick are:

"The earliest annual chief’s report in existence is from 1917. At this time, the police force consisted of 30 officers. Of these, 20 were constables, two were motorcycle officers riding Harley Davidsons and one was a truant officer. In addition, a patrol wagon had been purchased and was used 1,092 times that year — mostly for the conveyance of prisoners. It was also used 14 times as an ambulance."

In 1917, there were 20 automobiles stolen — all of which were recovered — and a total of 2,237 charges laid in police court. This was 945 more charges than were prosecuted in 1916. Almost $3,000 in fines was levied for traffic violations. The offences ranged from illegal parking to “furious driving.”

"By 1920, prohibition had started in the U.S. Our geographic location came into play in a major way. From 1920 to 1934, prohibition would enrich people on both sides of the border from the sale of liquor to the likes of Al Capone and the Purple Gang." 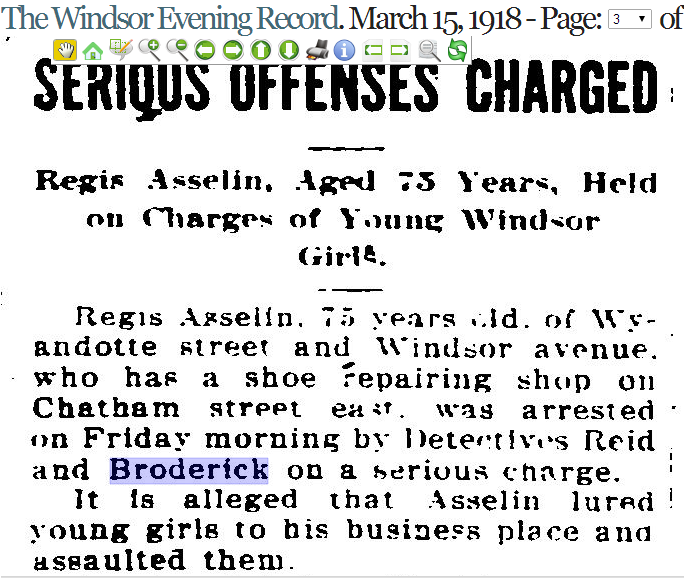