52 Ancestors No. 12: The Naturalization Papers of William Henry Coughlin

This is the twelfth of 52 blog posts for the 2015 edition of the 52 Ancestors challenge. I have been blogging my family history for the #52Ancestors challenge since it began in 2014.
#52Ancestors asks bloggers to "have one blog post each week devoted to a specific ancestor. It could be a story, a biography, a photograph, an outline of a research problem — anything that focuses on one ancestor.”

This week's blog post is about the Naturalization Papers of my great grandfather (GG) William Henry Coughlin (1872-1952) who was born in Poughkeepsie New York and emigrated to Canada in 1898 at 26 years of age. In November 2013, when the 1921 census was released, I learned that William was naturalized in 1915.

"Prior to the Canadian Citizenship Act of 1947 there was no such thing as a Canadian citizen. Persons born in Canada were British subjects. Those who had come to Canada from other parts of the Commonwealth were also British subjects and in terms of citizenship considered equal to those born in Canada. Those from non-commonwealth countries were considered aliens and had to become naturalized in order to enjoy the same rights as citizens." (Source: Family Search: Wiki)

With the Naturalization Act of 1906, aliens could become naturalized after spending three years in Canada. Through this process they became British subjects, although it was a status recognized only in Canada. Applications were made to judges in provincial courts. A tougher act was passed in 1914, although its implementation was delayed to allow anyone in Canada before 1 January 1915 to apply under the old rules. The last year for application of the older rules was 1917. The new law gave the same status to naturalized Canadians as those held by natural born British subjects.(Source: Family Search: Wiki)

I knew from the census information that GG Coughlin was naturalized in 1915. Unfortunately William Henry Coughlin's name was not found in any of the databases at the Library and Archives Canada - Naturalization index (1915-1951).

I submitted a written request through an Access To Information (ATI) request from Citizenship and Immigration Canada for my GG William Henry Coughlin's papers.

In February 2014 they sent me 14 pages dating from December 1915 to November 1940. These fourteen pages revealed lots of new information! 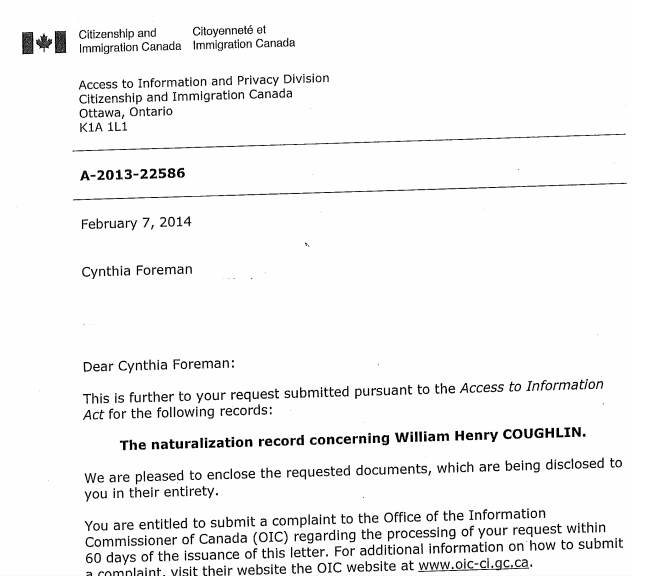 According to the Naturalization Records

Great grandfather Coughlin arrived on the New York Central Railway in 1899  through the port of Niagara Falls.

His occupation was a glassblower and he was issued a certificate of naturalization on the 14th of December 1915.

In 1940, William indicated that he was applying for naturalization under Section 8, "to renew old Nat. Papers so he may obtain a passport to visit relatives in the States."

In the remarks section from the RCMP interview we learn that the applicant (William Henry Coughlin):

On the 1901 census, Lizzie Coughlin is living with daughter Madeline Coughlin at the home of Lizzie's parents James and Mary Annal. Could this be the time period when William could only obtain "periodic work" in Canada and "returned to New York stayed for one year and lived at Poughkeepsie, N.Y" ?


The 1911 census listed the year William Coughlin's immigration as 1898, not the 1899 listed in the naturalization papers. It could be that it was November of 1898 and remembered in the later years as 1899? Wiliam is listed as a "glassblower".

It is in this 1921 census that we see the year of immigration as 1899 again and the new information that the year of naturalization was 1915.

The release of the 1921 census in November 2013 was instrumental in helping me locate William Henry Coughlin's year of naturalization which led me to these papers above and so much more information on my great grandfather's journey from Poughkeepsie, New York.